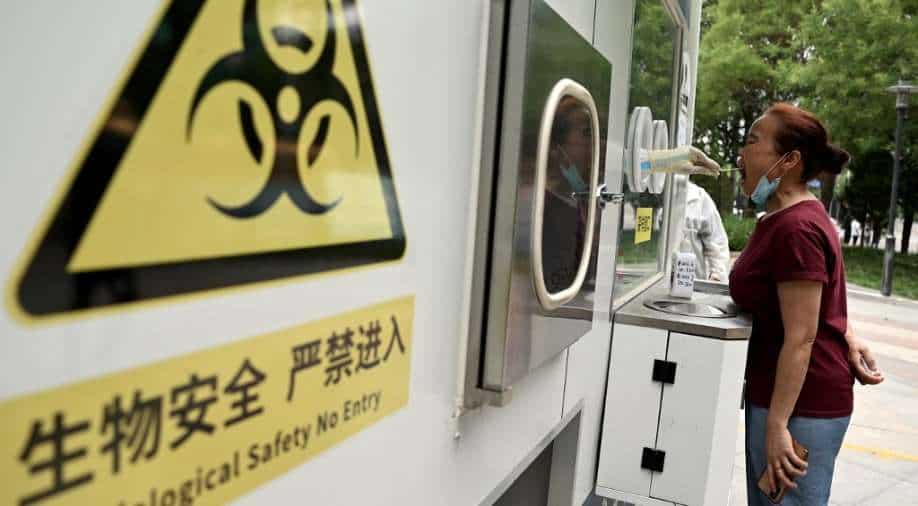 A woman has a swab sample taken to be tested for the Covid-19 at a swab collection site in Beijing on June 27, 2022. Photograph:( AFP )

The Chinese mainland on Friday reported 183 local COVID-19 cases, including 38 confirmed and 145 asymptomatic cases. Daily cases on Friday expanded from the previous day when the number of cases exceeded the 100 mark for the first time in 15 days.

Over the weekend, China's viral cases continued to rise, with hundreds of illnesses being found in the province of Anhui, where two counties were already under lockdown. Following 385 incidents on Saturday, the nation reported 380 cases on Sunday. Infection rates have recently increased after being below 50 for the majority of the preceding two weeks.

While China appears to have contained prior outbreaks in the major cities of Shanghai and Beijing, its Covid-Zero target is once again being put to the test in the country's eastern regions.

Jiangsu province, which is close to Shanghai, recorded 56 cases on Sunday.

On Sunday, Shanghai reported three local instances. After six days of the city reporting no community infections, one was discovered outside of government quarantine. At a briefing on Sunday, Zhao Dandan, a vice director of Shanghai's municipal health commission, warned that there is still a chance that the number of Covid cases will increase. There were no new cases in Beijing on Sunday.

On Wednesday, President Xi Jinping reiterated the need to adhere to the Covid-Zero policy. According to him, loosening Covid regulations would put too many lives at danger in the nation with the largest population, and China would prefer to temporarily slow down its economic growth than endanger the security and health of its citizens.

Ao Ieong U, the secretary for social affairs and culture, said during a briefing on Sunday that Macau, which reported its first two Covid deaths of the epidemic on Sunday, wouldn't rule out locking down the entire city if its virus-control efforts fail to stop transmission.

This week, the city will perform three additional rounds of large-scale testing, and 650 personnel from mainland China have already arrived to assist.

784 cases in total have been confirmed during the current outbreak, which began on June 18.

The city of Hong Kong's newly appointed chief executive, John Lee, stated that there is no imminent need for a citywide, mandatory Covid testing programme, but he underlined the importance of lowering daily infections, which had reached their highest level since April.

Lee, who was sworn in by Xi on Friday, told TVB on Sunday that the government has to conduct more laboratory nucleic acid testing for Covid but that for the time being, this will not turn into a widespread, mandatory screening campaign.

The chief executive acknowledged the need to stop transmissions, but he left it unclear whether Covid Zero—the strategy used by mainland China, which uses lockdowns and massive testing campaigns to eradicate infections—would be the end aim.