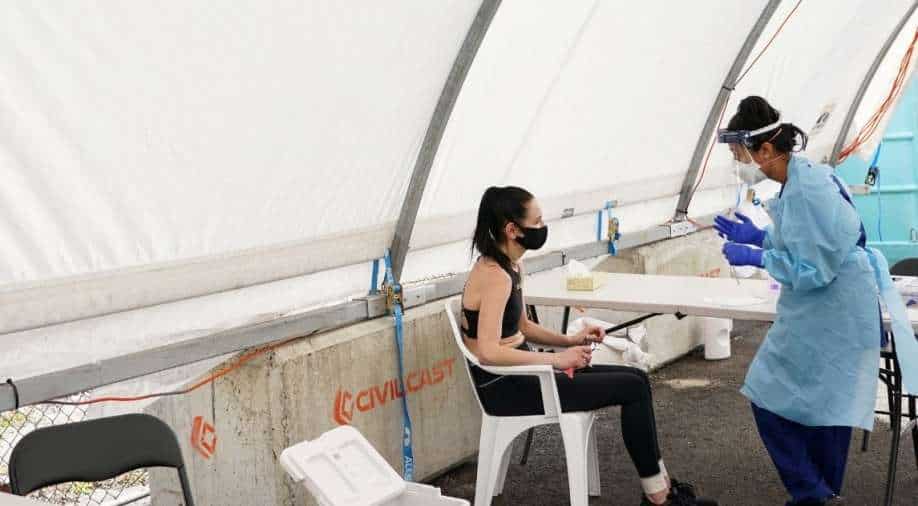 This is a file photo, ehich shows a medical worker administering a test for the coronavirus disease. Photograph:( Reuters )

In Australia, hospitalisations remain far lower than during the Delta wave

Amid a rise in coronavirus (COVID-19) cases worldwide, countries are contemplating strict measures to curb the spread and so as Australia as some states are re-instating rules.

The Victorian government has expanded its face mask mandate across all indoor settings as well as outdoors at major events.

James Merlino, who is Victoria's acting premier, has announced that masks will become mandatory for those eight years and above from 11.59pm (local time) Thursday.

Merlino said, "This is a sensible response which will allow businesses to stay open, bars and restaurants to continue to stay open and major events to go ahead."

"Masks are a cheap and effective way to maintain the health of the community – it’s something public health experts have been calling for," he added.

Not just Victoria, New South Wales (NSW) also said it was again making it mandatory to wear masks indoors in public places, while venues were told to limit visitors and re-activate customer check-in via QR code.

New South Wales Premier Dominic Perrottet told reporters, "Today's changes are modest, cautious and take a precautionary approach as we move through this holiday period to the end of January."

It is important to note that Australia is reporting a major spike in Covid infections, however, Prime Minister Scott Morrison has said that there won't be lockdowns.

New South Wales listed 5,715 new cases Thursday, which was up from 3,763 a day earlier. Victoria recorded 2,005 new Covid cases and 10 deaths on Thursday.

Hospitalisations remain far lower than during the Delta wave, with about 800 people in hospitals out of nearly 44,000 active cases. But only 37 of those are Omicron cases, the health department said in an emailed response as reported by Reuters.

Amid the Omicron wave, Australia's tally of 273,000 infections and 2,173 deaths is far lower than many countries.