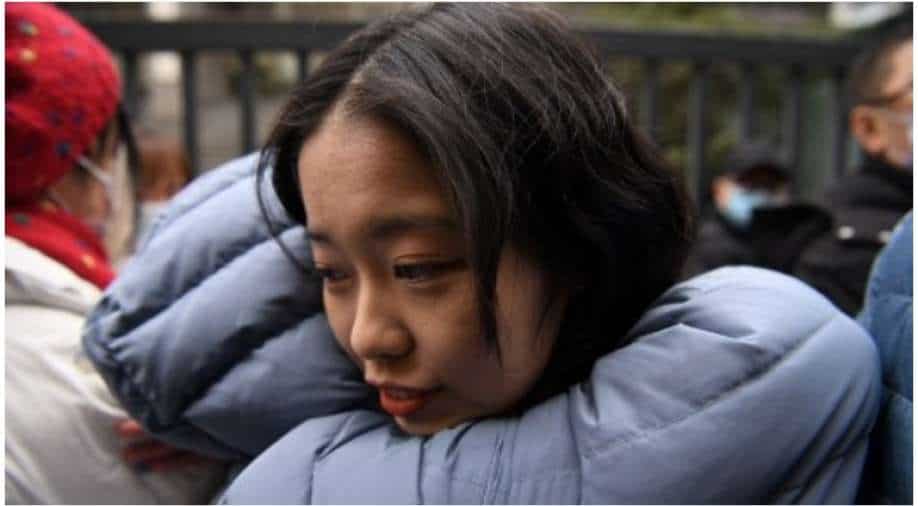 A supporter hugs Zhou Xiaoxuan, a feminist figure who rose to prominence during China’s #MeToo movement two years ago, as she arrives at the Haidian District People’s Court in Beijing on December 2, 2020 Photograph:( AFP )

The accuser levelled sexual allegation charges against prominent television host Zhu Jun in 2018. She accused him of groping and forcibly kissing her when she was an intern at state broadcaster CCTV

Hearing for sexual harassment allegation against a popular television personality in China has begun. The accuser has called this a major moment in country's still-young #MeToo movement

Zhou Xiaoxuan, now 27, levelled sexual allegation charges against prominent television host Zhu Jun in 2018. She accused him of groping and forcibly kissing her when she was an intern at state broadcaster CCTV.

China's first-ever civil code -- passed in May -- expanded the definition of sexual harassment, but many women are still reluctant to come forward and it is rare for cases like this to make it to court.

"I'm very nervous," she told AFP on Wednesday ahead of the hearing. "But whether we win or lose the case, it has meaning."

"If we lose, it allows the questions we raised at least to remain in history. Someone will have to give us an answer."

Zhou Xiaoxuan's case against Zhu was originally filed under the "personality rights" law -- covering rights relating to an individual's health and body -- but her lawyers have asked for it to be considered under the new legislation.

She said she found herself alone in a dressing room with Zhu in 2014, and that he groped her after asking if she wanted to continue to work for the channel after her internship.

Zhu is a former host of the country's annual Spring Festival Gala -- one of the world's most-watched television shows -- and other major broadcast events.

He has denied the allegations, and launched his own court case accusing her of damaging his reputation.The woman was among a wave of people who came forward in 2018 when an emerging #MeToo movement rocked China.

When Zhou initially reported the case to police, she said she was told that speaking out would affect the image of the state broadcaster where Zhu worked and hurt the feelings of those who admired him.

"These (experiences) make you feel like your existence is very insignificant," she told AFP.

"Actual harm inflicted on your body can't even compare with the other party's illusory fame and power."

Many women are reluctant to speak out in China's conservative society where victims can also face blame.

But the woman has no regrets about launching the case and says that even if it is unsuccessful, she hopes it will encourage more women to speak up.

"Even if I had to experience this all over again, I don't regret it. In this process I developed an emotional connection with many women and men who had similar experiences," she said.

"I think all of this is still meaningful."

Although China's #MeToo movement was restrained by online censorship and a tightening on civil community issues, several well-known individuals came under fire over allegations of sexual misconduct, including the former head of the government-run Buddhist association.