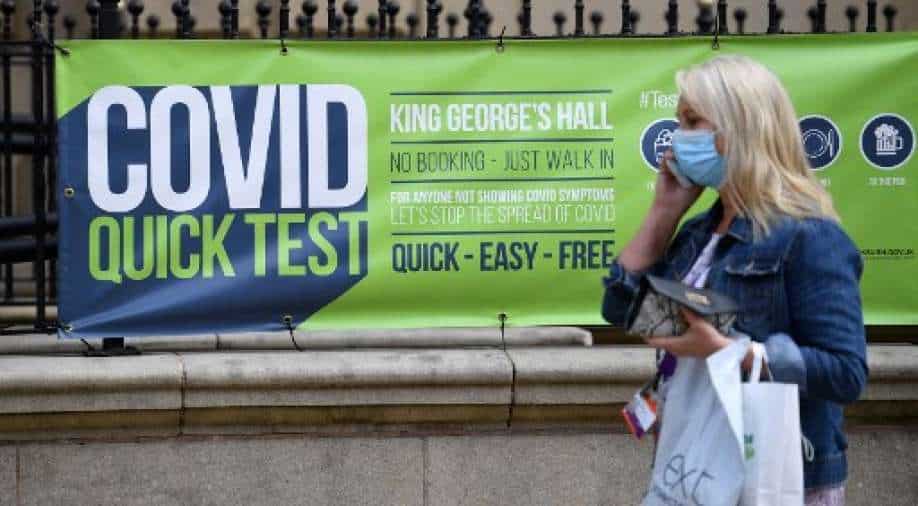 A pedestrian with a mask walks past a sign for a walk-in Covid-19 testing centre in Blackburn, north west England Photograph:( AFP )

A research revealed the Delta variant had driven a 50 per cent rise in infections in England since May and has been doubling every 11 days.

According to British health officials, the Delta coronavirus variant also known as B.1.617.2 has risen exponentially with over 33,000 cases reported cases last week.

On Thursday Britain recorded over 11,000 COVID-19 cases which was the highest since February. UK Prime Minister Boris Johnson had pushed back restrictions which was set for June 21 earlier amid a surge in cases.

The increase in the number of cases come even as Britain has vaccinated at least 60 per cent of their citizen with at least one dose of the vaccine.

The UK government said it needs another four weeks to fully vaccinate more people since unvaccinated people were especially vulnerable, according to a government report.

A study by Imperial College London showed that the virus is spreading rapidly in the younger age group who haven't been vaccinated amid fears of increased hospitalisations.

The research revealed the Delta variant had driven a 50 per cent rise in infections in England since May and has been doubling every 11 days.

The B.1.617.2 is now the dominant variant in the UK which has led to increased hospitalisations with cases having doubled in several areas in England including Yorkshire and West Midlands

Hancock added that the government is contemplating making the move mandatory for National Health Service (NHS) health workers as well in order to protect patients.

The new rule will come into force from October as the government informed that 78 per cent of social care workers have already been vaccinated.