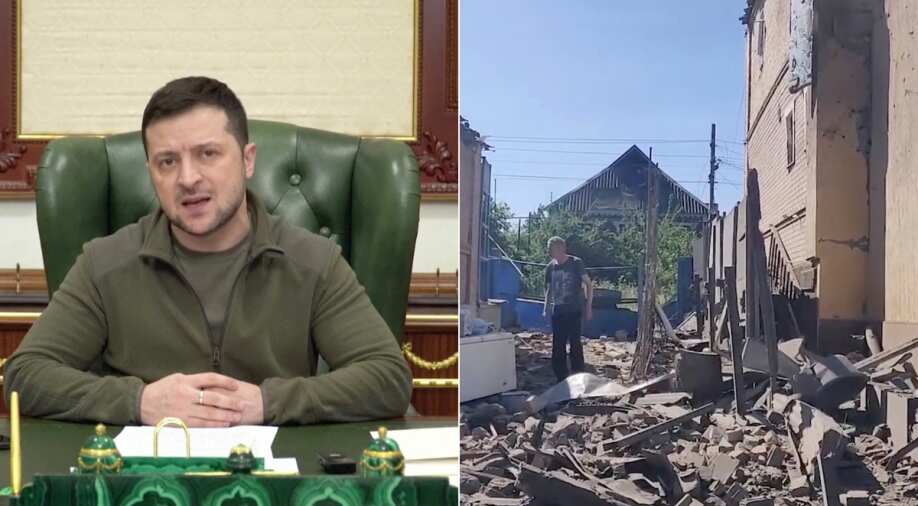 (right) A man walks in the rubble near damaged buildings, as Russia's invasion of Ukraine continues, in Bakhmut, Donetsk Oblast, Ukraine in this still image obtained from a social media video released on July 2, 2022. Photograph:( Reuters )

In recent days, Russia has intensified strikes in different parts of the country. Although, Ukraine believed that abandoning the Snake Island by Russian troops "changes the situation in the Black Sea considerably"

As per reports by news agencies, the missiles hit a nine-storey apartment building and a recreation centre in Serhiivka about 80 kilometres south of Odessa. The officials revealed that two children were among the dead and six others among the injured.

Responding to the same, Zelensky said, "I emphasise: this is an act of deliberate, purposeful Russian terror -- and not some kind of mistake or an accidental missile strike."

"Three missiles hit a regular nine-storey apartment building, in which nobody was hiding any weapons, any military equipment. Regular people, civilians, lived there," he added.

Russia has intensified strikes in different parts of the country.

On Saturday (July 2), explosions rocked the southern Ukrainian city of Mykolaiv, the mayor said as air raid sirens sounded in the Mykolaiv region. It borders the vital Black Sea port of Odesa.

Mykolaiv mayor Oleksandr Senkevych wrote on the Telegram messaging app: "There are powerful explosions in the city! Stay in shelters!"

More details related to blasts in the Mykolaiv region are unknown, although Russia claimed that it had hit army command posts on Saturday in the particular area.

Recently, a strike on a shopping mall in the central city of Kremenchuk was condemned after reports emerged that at least 19 died.

Meanwhile, Russia says it has been aiming at military sites and denies taking aim at civilians. Kremlin spokesperson Dmitry Peskov said that "Russian Armed Forces do not work with civilian targets".