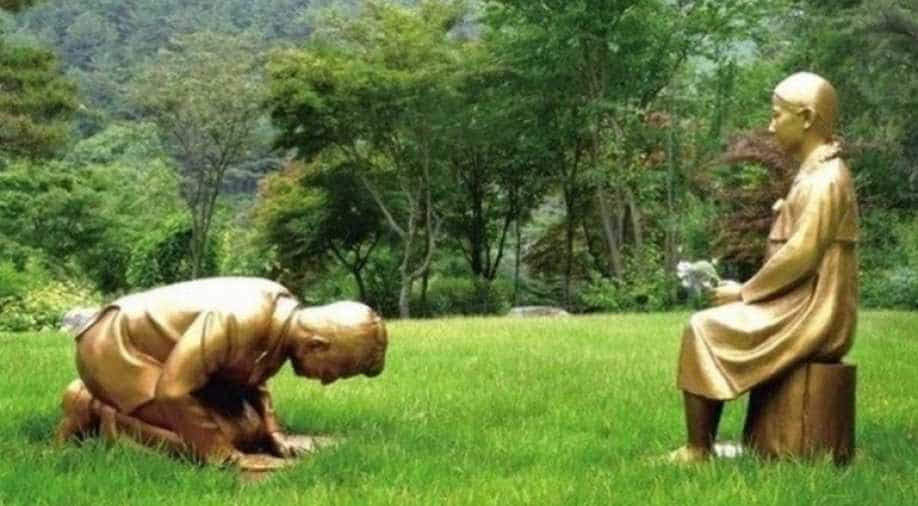 Japan on Tuesday warned South Korea against a statue erected in the country showing Japan's Prime Minister Shinzo Abe bowing to a "comfort woman" on display.

Japan's chief cabinet secretary, Yoshihide Suga, said on Tuesday if reports of the statue on display were true, it would be an "unforgivable" breach of international protocol.

The head of a privately run botanic garden, Kim Chang-ryul, who commissioned the statue called "Eternal Atonement" said the kneeling figure was meant to depict anyone who could be in the position to apologise formally for the historic wrong, and not Abe in particular.

South Korea's foreign ministry said there may be international protocol to consider, but declined further comment, saying it was an act by a private citizen.

The issue of comfort women, mostly Koreans forced to work in Japan's brothels before and during World War Two, and the question of whether victims were adequately compensated have long been a thorn in ties between the two countries.

Japan regards the matter as "finally and irreversibly resolved" by a 2015 agreement reached by Abe and then South Korean President Park Geun-hye under which Abe apologised and pledged a fund to support the survivors.

But South Korean President Moon Jae-in's government has declared the deal flawed, in effect voiding it.

Similar statues of girls alone have been set up in front of the Japanese Embassy in Seoul and elsewhere to honour the women.

Ties were strained last year when Japan imposed export curbs on high-tech materials to South Korea following a South Korean court ruling ordering Japanese firms to pay compensation to Koreans forced to work for them during the war.