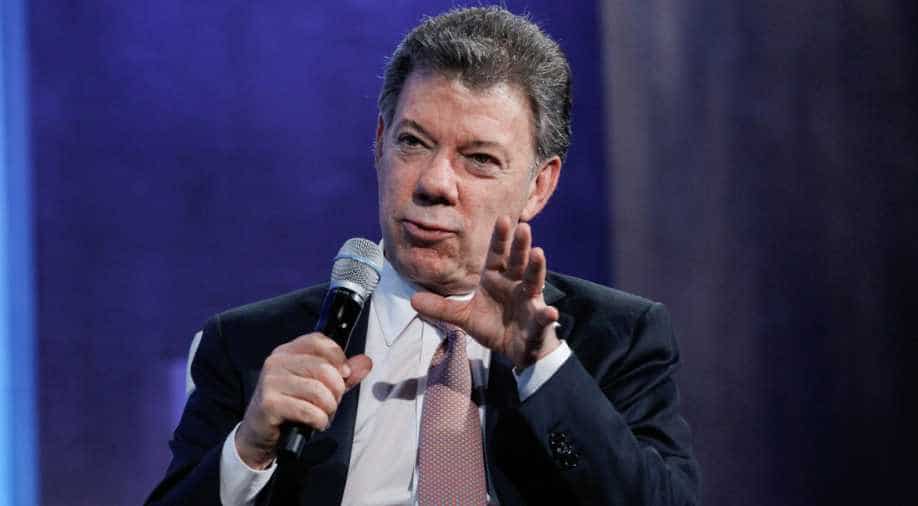 President Juan Manuel Santos and the Revolutionary Armed Forces of Colombia (FARC) have been holding peace talks for nearly four years, and ten days back signed a ceasefire. Photograph:( Getty )

Follow Us
Colombia's peace deal with FARC rebels will be formally signed on September 26, in a new milestone towards ending the half-century conflict, President Juan Manuel Santos said Friday.

"Peace will be signed on September 26 in Cartagena," announced Santos, ahead of an October referendum on final ratification of the historic accord with the Revolutionary Armed Forces of Colombia.

The emotional president called it "perhaps the most important announcement" of his life.

Minutes later, FARC leader Timoleon "Timochenko" Jimenez tweeted the date and location of the signing, calling it "the foundation for building #peace."

Various Latin American leaders, as well as Spanish Prime Minister Mariano Rajoy, were expected to attend the ceremony in the port city on the Caribbean coast.

Once the deal is formally signed, the FARC will have 180 days to demobilize, disarm and relaunch itself as a political party. The UN has agreed to monitor the process.

The government and FARC began a landmark ceasefire Monday, the first time both sides have put down their weapons since the Marxist guerrilla group was launched in 1964.

The conflict, which has drawn in various left- and right-wing armed groups and gangs, has left 260,000 dead, 45,000 missing and 6.9 million uprooted from their homes.

On October 2, Colombians will vote on this question: "Do you support the final accord to end the conflict and build a stable and lasting peace?"

A new poll out Friday said 59.5 percent would vote "yes" in support of the agreement, according to the survey conducted for El Tiempo newspaper and W Radio.

That was nearly double the number of those opposed to the deal, at 33.2 percent, while 4.7 percent said they were undecided and 2.6 percent had no opinion.

To be ratified, the August 24 peace deal needs "yes" votes from 4.4 million voters -- 13 percent of the electorate.

On the rebel side, the agreement must be ratified at FARC's 10th national conference, which will take place from September 17 to 23.

It would be the group's "last meeting with weapons... ratify the peace agreement and transform FARC into a legal political movement," the group said in a statement.

Guests and journalists were invited to attend the meeting in the former rebel stronghold of San Vicente del Caguan because "the historic importance of the event means that the people of Colombia and the world must be directly informed of the progress and conclusions," FARC said.

The conference had originally been scheduled for September 13 to 19 but the group said Friday it had to be changed for "logistical reasons."