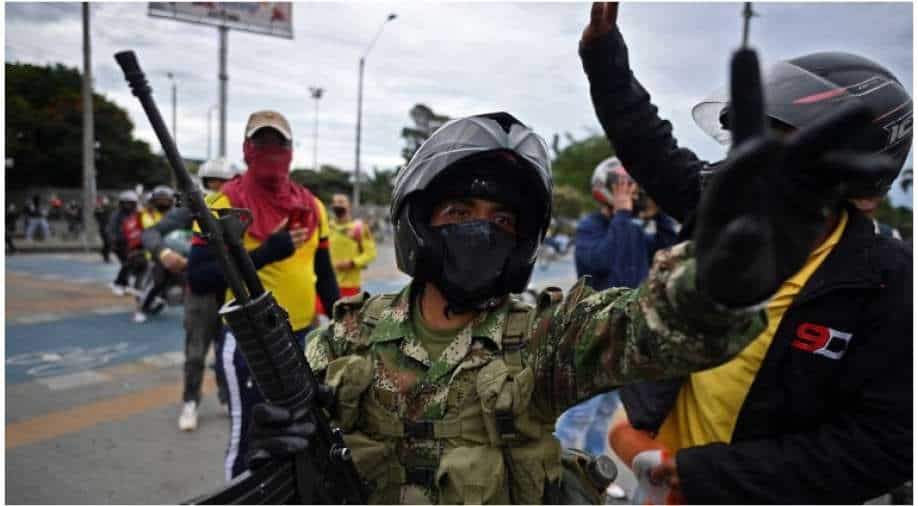 A soldier tries to calm demonstrators down in the framework of a new protest against the government of Colombian President Ivan Duque, in Cali, Colombia, on May 28, 2021. Photograph:(AFP)
Follow Us

Video footage showed a man lying in a pool of blood and another nearby wielding a gun; that man was then attacked by a group of people

At least 10 people in the city of Cali were in a day of anti-government protests as per authorities. Colombia has entered second month of demonstrations that have met violent repression.

Colombian President Ivan Duque has already announced that he was deploying military to Cali.

"Ten people" are dead, "this is the toll we have this morning" in events linked to Friday's demonstrations, Cali's security secretary Carlos Rojas told Caracol radio. Police said eight of the 10 were shot dead.

He spoke after reports of violent street clashes. In one case, a representative from the Cali prosecutor's office said an off-duty investigator had shot at a crowd, killing a civilian, before being lynched by protesters.

Video footage showed a man lying in a pool of blood and another nearby wielding a gun; that man was then attacked by a group of people.

"In the south of the city we had a real scene of confrontation and almost an urban war where many people not only lost their lives, but we also had a significant number of injuries," said Rojas.

After chairing a security meeting in the city, Duque announced on Friday "the maximum deployment of military assistance to the national police" would begin immediately.

Jose Miguel Vivanco, the rights group's executive director for the Americas, urged Duque to take "urgent measures to de-escalate, including a specific order prohibiting agents of the state from using firearms."

Analysts have blamed the government's militarized history for its response to the protests.

For more than 50 years, Colombia's war against leftist FARC guerrillas eclipsed all other government priorities, with the state emerging from the conflict militarily strong but weak on social redress.