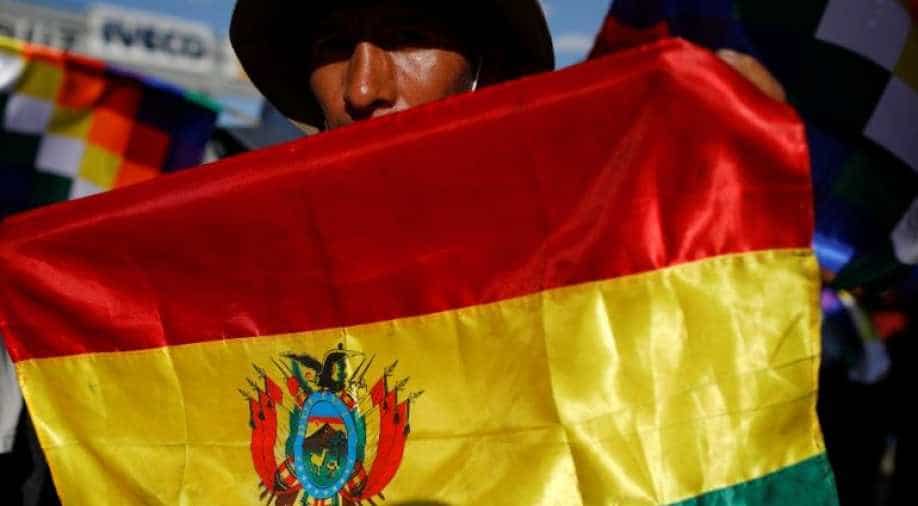 Police fired tear gas at the protesters in Bolivia's coca-growing highlands to keep them from entering the city of Cochabamba to demand Morales return to finish his term.

Thousands of Bolivian coca farmers marched on Monday to demand the resignation of interim President Jeanine Anez, who was forced to suspend a trip to her home province earlier in the day after receiving a death threat.

Unrest has worsened since Evo Morales resigned as president a week ago over allegations of vote rigging as attempts at dialogue between his loyalists and the interim government have faltered, with both sides trading accusations of fomenting violence.

Anez, 52, a former opposition senator, assumed the presidency after Morales and his vice president resigned at the "suggestion" of the military, followed by three others in the line of succession. Mexico has given Morales asylum.

But Anez has faced a wave of protests led by Morales supporters who say she was installed in a coup and that her presidency threatens the gains made for the non-white majority in Bolivia during Morales' 14 years in office.

Police fired tear gas at the protesters in Bolivia's coca-growing highlands to keep them from entering the city of Cochabamba to demand he return to finish his term, which had been due to end in January.

Some farmers threw rocks at security forces and at least ten protesters were arrested, a Reuters witness said.

The region, long a bastion of Morales' support, was rocked last week by what human rights observers have described as a disproportionate use of force in the town of Sacaba after security forces shot dead up to ten anti-government protesters.

"What happened in Sacaba weren't clashes, it was a military intervention," the state human rights defender, Ombudsman Nadia Cruz, said on Twitter on Monday, calling for dialogue.

Anez' government has said that some protesters in Sacaba were armed, and that police officers had also been wounded.

The office of the ombudsman, which monitors conflicts in the country of 11 million people, said 20 people have been killed since Morales resigned, more than in the previous three weeks during protests against his government.

Anez had been due to travel to Beni province in northeastern Bolivia but cancelled the trip after a credible threat against her life by a "criminal group," interim Interior Minister Arturo Murillo told a news conference.

Murillo accused Venezuelans, Cubans, and Colombians of involvement, without providing evidence. Cuba and Venezuela were close allies of Morales, a socialist.

Anez' government has asked Venezuelan diplomats and Cuban doctors to leave the country, accusing them of stoking unrest, and plans to sever ties with Venezuelan President Nicolas Maduro.

Carlos Mesa, the presidential candidate who came in second in the disputed Oct. 20 election, has urged Anez to schedule new elections with or without the support of Morales' Movement to Socialism party (MAS), who have a majority in Congress.

"An immediate summons (of elections) is necessary to solidify the legitimacy of President Anez," Mesa said in a videotaped messages to his followers on Monday.

An adviser to Anez, presidency minister Jerjes Justiniano, said he also supports calling an election by presidential decree if an agreement cannot be reached with MAS.

"We will have an election," he said. "The greatest honour for a Bolivian is to become president of the country but that person must win with votes, not with bullets or boots."

Bolivia's Roman Catholic Episcopal Conference said that, together with the European Union and United Nations, it would seek to facilitate talks on a roadmap for a vote.

"Holding new, transparent and credible elections is the best way to overcome differences in a democratic and peaceful way," the Church said on Monday.

The prospects for dialogue were looking bleak, however.

Murillo has angered MAS lawmakers by threatening to unveil a list of legislators involved in alleged sedition.