'Clothes have no gender': Dad of 3 wears heels and skirts everyday 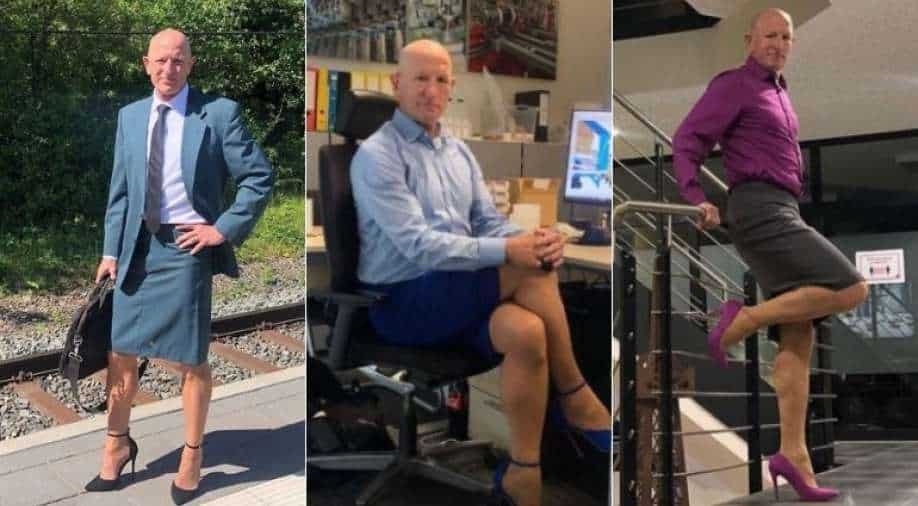 A 61-year-old American living in Germany. Mark is a mechanical engineer and I work for a Robotic Company. Photograph:( Instagram )

A mechanical engineer by profession, 61-year-old Mark who is now married for 11 years and has 3 daughters wears, skirts and high heels to prove that clothing is clothing and it should have no gender limitation to it.

Mark Bryan is an American, but he currently lives in Germany and is a robotic engineer. He lives his life like every other person, except that he challenges gender stereotypes every day.

Married for eleven years, Mark gets full support from his wife, and much often, she makes suggestions on what he should wear. Interestingly, Mark’s daughter sometimes wishes to borrow his shoes are they are really stunning and classic.

In a conversation to WION, Mark emphasized that people should be comfortable in whatever clothes they want to wear. Binding styles into gender is a bit of injustice to people who want to enjoy styling without any limitation or questions on their sexual orientation.

Here are the excerpts of the interview:

WION: Tell us something about your family and your profession?

MARK BRYAN: I’m a 61-year-old American living in Germany. I’m a mechanical engineer and I work for a Robotic Company. I’ve been married for eleven years. I have three children, they all live in states.

Working these 5” heels. Sorry for taking so long since last upload. This was back in June. The way all of you followers have responded has blown me away. Thanks . @lostink.official @landsend @tagheuer @underarmour.

Decided to wear some boots today and a longer skirt. It’s not cold today, but very cool. Worked at home this morning and now going into the office to meet with my 2nd shift group. I am just a normal, happily married, straight guy that loves Porsche’s, beautiful women, and likes to incorporate a skirt and heels into his daily wardrobe. Clothes and shoes should have no gender. #meninskirts #markinhighheels #clotheshavenogender #maninheels #maninhighheels #socialdistancing #maninskirt #skirtsformen #heelsformen

WION: What inspired you to wear heels and a skirt?

MARK BRYAN: I’ve been in the business corporate environment for almost 35 years and I’ve always had to wear a suit and a tie. It just got very boring, especially in the last 5 years. I’m wearing black, I’m wearing navy blue, I’m wearing brown, I’m wearing grey. Those were the only colour choices we have in suits and stuff and also we just have a pair of brown shoes and a pair of black shoes. It was the same thing every day for the last 35 years. It kind of clicked on me one time when I was out trying to buy a new pair of black shoes to wear at the office, I passed through the women department and I was like okay, there are some nice colours out there which look very interesting. I thought that okay, I think I’ll just start wearing high heels and started wearing little more colours and stuff like that. I started wearing high heels with pants, I wore high heels that matched my shirt for the day. But, there still was black pants or white pants. And then some colleagues joked around and said, someday you’ll start wearing a skirt. So, that’s how the skirt came into it. I went out, picked a skirt tried it on and thought, ok the skirt doesn’t look too bad. And that’s basically how I started wearing a skirt with heels, which is 3 years back from now.

WION: When did it all start for you?

MARK BRYAN: It was about 40 years ago when I was in college. It was a girlfriend, we were living together. She was of the same height that I was. I am 6feet, she was 6feet and she loved wearing high heels, which made her taller than me, so I wasn’t too happy about that, so she said that you’re gonna start wearing high heels too. As a man, I have very small feet, we had the same size foot, so I can wear her shoes, that’s how it all started with me wearing high heels.

WION: Do you think clothes have any gender?

MARK BRYAN: I think clothes should have no gender. With all the people that follow me on Instagram, I get a lot of responses on my pictures, and I get a lot of response from people that are excited that I’m doing this coz it opens other people’s eyes or it gives them the strength to choose what they want to wear. Not just men wearing women clothes but also women wearing men clothes. I was surprised by the number of women who responded saying that we’re so happy that you’re doing this. I’m a woman but I like to wear men clothes but sometimes I’m scared to go out, coz people will think I’m a lesbian. Same things I get from men, they’ll say, hey, I’m glad that you’re doing this. You’re opening everybody’s eyes, you’re giving hopes to people to do different things. I’m a man and I want to wear women clothes but I’m scared to go out coz I’ll be called out a gay. In a way, I think I’m helping people to think that it is okay to dress with what you feel more comfortable in. What a person wears should not dictate his or her sexual orientation. I’m a straight man, but I wear a skirt and high heels. That doesn’t make me any less of a man.

WION: Carrying heels is a difficult job. How difficult for it for you to get used to it and be so graceful?

MARK BRYAN: I’ve got very strong legs and I’ve got very strong ankles, I’ve hardly had any ankles problem or leg problem as such. I think that’s one of the reasons why I can wear heels fairly comfortably. Of course, the higher heels I choose the more pressure it puts on my feet and I do have discomfort at times when I’m standing for too long or I have walked too long, especially with the higher like 5-inch heel, then I do have a little bit of soreness and stuff, typically like if I behind my desk or working on the computer, I’ll kick off the heels underneath the desk and massage my feet with the tennis ball.

WION: How does your family view this decision of yours? What about your wife and daughter, do they come up with suggestions to help you style up with the right choices?

MARK BRYAN: last night I posted a picture on Instagram with me modelling a pair of shoes that one of my sponsors had given me to try on, for me to try post on my Instagram account. My wife says, Mark, you haven’t shown them very well. You could have done some twirls to show the backs. So yes, she is supportive about it and one of my daughters is always asking that Dad I want to borrow your shoes, but unfortunately, we have different size and I know she can never wear my shoes, but I think she jokes around as fun with asking me to borrow my shoes.

WION: Do you ever feel uncomfortable in heels and skirt? Any incident that you remember where people around you made it awkward for you?

MARK BRYAN: I’m kind of at the age where I don’t care what the people think. So, I’ve been called a lot worst things, I’ve been called a lot of worse. I’ve had no one, other than people face to face calling me names. The only negative things I come across is people posting negative stuff on my Instagram account on pictures. Those things I just leave them there, I just ignore them. Most of the times when I’m out in public, I try to make contact with everyone that comes across to me coz that’s the way I am, but men will look at me and go back to looking or ignore the eye contact. But, women when they make eye contact, they smile, some will wink at me, some will give a thumbs up. I’ve had people approaching me. Women approach me with compliments, saying I love your shoes, where did you get them, I love your skirt, you look so good. If a man approached me typically they ask, how do you not break your ankles wearing those shoes. Most of the times it is a question on how I do it or either compliment.

WION: What are your favourite style to wear and your fav style of heels?

MARK BRYAN: My favourite ones are the 5inch stilettos heels. Not because they’re my fav but I think they look the best. They make your legs, the muscle definitions stand out. They also make you stand a little more upright making your posture a little better. For comfort, 3 and a half inches stilettos heel or 4-5 block heel is more comfortable.

WION: How many pair of shoes do you have?

MARK BRYAN: I have probably a little over 50 pairs of shoes.

WION: Your fascination for skirt and heels comes at a time when women are rejecting heels. What are your views on that?

WION: Any advice to men who would like to take up the style? Any style tips for them?

MARK BRYAN: Naturally, start with a lower heel to get used to it. And then once you decide to go out in public, I suggest you have confidence in yourself. You got to be confident in yourself, you’ve got to be strong inside, saying that I’m not going to be afraid because I think that people can pick up on that. If you go out there and you’re afraid, people will pick up on that. Because your kind of coward and people sense that you’re weak and when they are that you’re weak they’re like predators. That’s when you invite the attacks to come because they feel that you’re weak and they’re gonna abuse that weakness. But if you show that you’re confident and strong people just leave you alone.