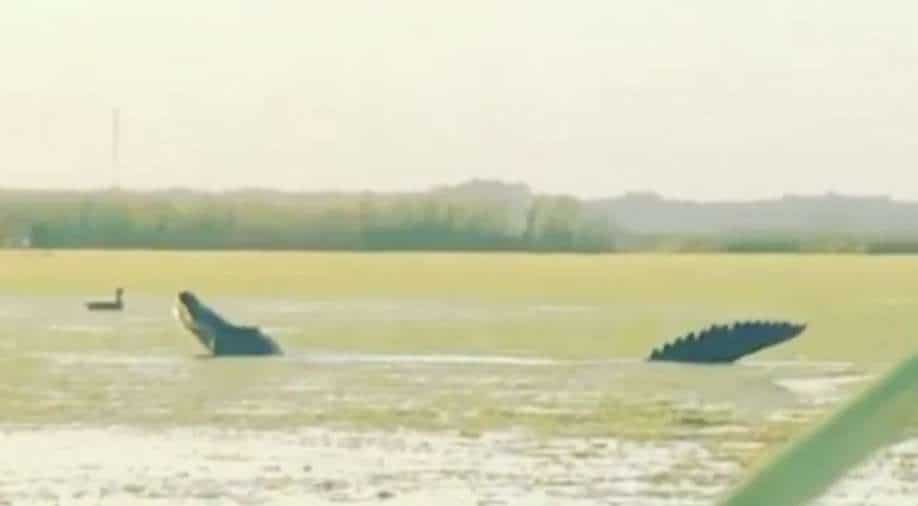 Fox News reported that Kevin Stipe and Cass Couey, who own the PRO HUNT navigation app, saw the giant alligator while they were hunting ducks in Leesburg earlier in the week.

Watch the unbelievable visuals below:

😲🐊 What looks like something straight out of Jurassic Park is actually a 13 foot alligator stealing ducks from these hunters near Leesburg, Florida.

Couey also shared the clip on Facebook. He wrote: “It’s not just fishing, Florida duck hunting has a taxman too! Monster alligator eats duck while hunting”.

As of now, the video is nearing 8 lakh views, with the numbers rapidly rising. Facebookers and Twitterati were quick to react to the unbelievable sight, especially the size of the alligator!

Conspiracy theorists are everywhere. A user on Facebook wrote - "I don't think the ducks were real the other ones never moved and it wouldn't of taken that long to chew it up".

#JurassicWorld
Masrani : "I never asked for a monster!"

Dr. Henry Wu : "Monster is a relative term. To a canary, a cat is a monster. We're just used to being the cat."

Others had more pertinent questions

Stealing ducks from the hunters? Since when do the hunters own the ducks?

Another user highlighted the dangers of sailing in Florida

Another regular day in Florida... This is seriously why I stopped sailing on lakes in Florida ❄️