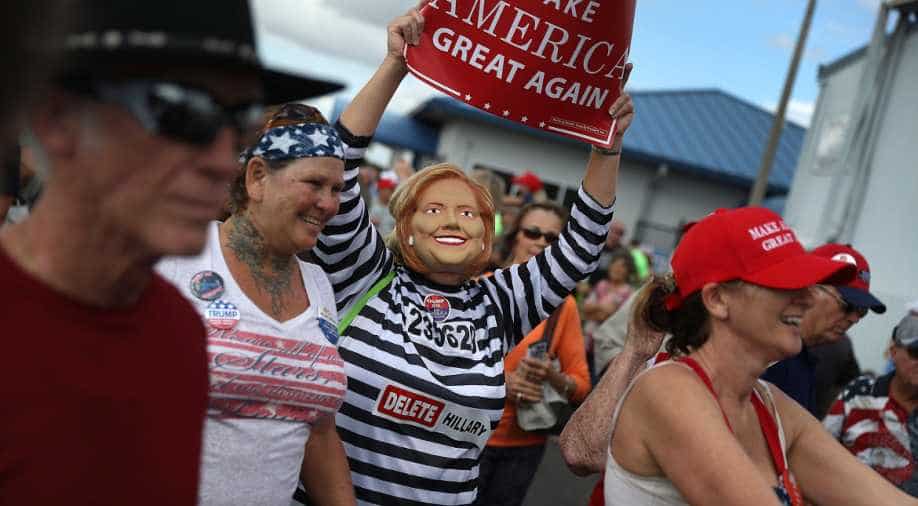 A supporter of Republican presidential candidate Donald Trump wears anti-Hillary Clinton prison garb as people wait for him at his campaign rally at the Lakeland Linder Regional Airport on October 12, 2016 in Lakeland, Florida. Photograph:( Getty )

The Clinton campaign has issued cease-and-desist warnings to any TV or radio station, demanding that they refrain from airing ads from pro-Trump groups stating that his democratic rival is "under investigation by the FBI", The Hill reports.

CNN reported that the letters were sent on Sunday, the same day that FBI Director James Comey anounced that the newly discovered emails would not change the FBI's original conclusion from July 5, that Clinton was innocent of any criminal wrongdoing.

"These ads falsely claim Secretary Clinton is under investigation by the FBI," wrote Marc Elias, the general counsel for the Clinton campaign. He also writes that "at no point" did the FBI "reopen" an investiation into Clinton's emails. "The claim in these ads is provably false."

The prospect of misinformation affecting the 2016 US election, and possibly tainting its result, is considerable. There are already early reports from advanced voting related to voter intimidation and voter suppression.

Jon Favreau, President Obama's chief speech writer from 2005-2013, pointed out that today's Moscow Times reports that Russian news media is sending Russians living in Russia the number to a hotline where they can report so-called vote fraud to Donald Trump. While the hotline is primarily for Russians living in the US, there is an option to "Press 1" for callers located within Russia.

One last push from a foreign government intervening in our election on behalf of Trump! https://t.co/0HEouhNPE6

This frantic atmopshere of misinformation poses a two-fold threat: that the election result itself is tainted, and that the result is perceived to be tainted. Democracy can't be strong if its very foundations, a free voting process, is questioned.