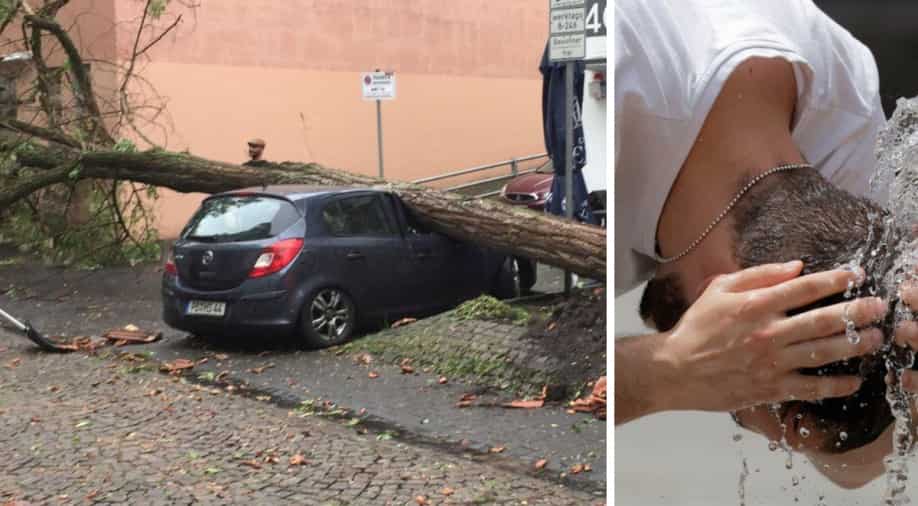 In Germany, a strong tornado left behind a trail of destruction in several towns in the western part of the country, leaving more than 40 people injured and one dead

Climate change is taking a heavy toll on Europe, with tornado ripping through Germany while Spain endures one of the worst heatwaves in its history.

In Germany, a strong tornado left behind a trail of destruction in several towns in the western part of the country, leaving more than 40 people injured and one dead.

Officers in the western Paderborn city, which has a population of about 150,000, said the winds, which meteorologists warned could reach up to 130kmph (81mph), blew away roofs, toppled trees and sent debris flying for miles.

"Thirty to 40 injured, at least 10 of them seriously," Paderborn police said, according to Sky News.

People have been urged to remain in their houses so that the rescue efforts are not hampered, otherwise they could endanger themselves.

As heavy rain and hail swept across the country, the western German town of Lippstadt was also heavily damaged by a tornado, officials said.

A 38-year-old man also died in severe storms which lashed the region on Friday.

Images on social media showed that in nearby Hellinghausen, a steeple had been ripped off the roof of a church tower, with the rubble scattered in the churchyard.

Whereas contrasting conditions were witnessed in Spain with temperatures of more than 40 degrees Celsius in some places, making May the hottest month.

The state weather agency, AEMET, issued heat warnings in 10 regions for Saturday, saying it could be “one of the most intense” heatwaves in years.

The city of Jaén in southern Spain recorded its highest ever May temperature of 40C on Friday.

Meteorologists say that Spain's unseasonably warm spring weather is due to hot air coming from North Africa, causing temperatures to rise by up to 15C above average for this time of year.

The worst-hit regions are Andalusia in the south, Extremadura in the south-east, Madrid and Castilla La Mancha in the centre and Aragon in the north-east, BBC reported.

Spain's health ministry urged residents to drink plenty of water and to stay in cool places when possible. It also advised people to reduce physical activity.