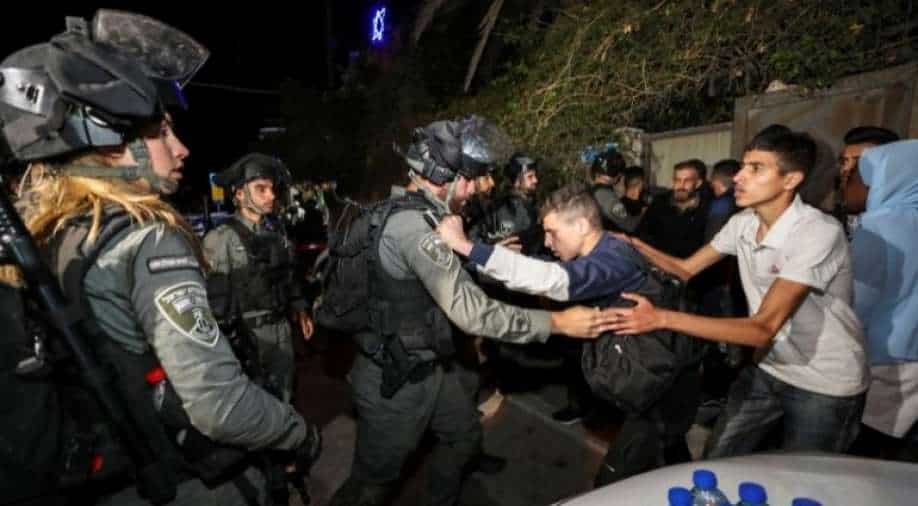 An Israeli border policeman scuffles with a Palestinian protester during clashes amid ongoing tension ahead of an upcoming court hearing in an Israeli-Palestinian land-ownership dispute in the Sheikh Jarrah neighbourhood of East Jerusalem May 3, 2021 Photograph:( Reuters )

Over the last week, police donning riot gear on horseback have been patrolling the neighbourhood of Sheikh Jarrah

"Go back to Jordan," Reuters quoted settlers in the Sheikh Jarrah neighbourhood as saying. The neighbourhood was captured by Israel in 1967 during the Middle East war.

Over the last week, police donning riot gear on horseback have been patrolling the neighbourhood. They have arrested several Palestinians and has been using water cannons to spray a foul-smelling liquid to ease the crowds.

The neighbourhood of Sheikh Jarrah is situated outside Jerusalem’s Old City which is near the Damascus Gate. This area is home to many Palestinian homes and apartment buildings.  Just a few days back, the area surrounding Damascus Gate witnessed nightly clashes over access to the square.

According to Palestinian medics, 12 Palestinians have been injured in the clashes since Sunday. Out of these, three have required hospital treatment. The police say that Palestinian protesters hurled rocks and firebombs at authorities during the demonstrations.

The neighbourhood is largely Palestinian, but it includes a site highly revered by Jews - the tomb of an ancient high priest - Simon the Just.

Ruling on Thursday at Israel’s Supreme Court will decide whether the ruling by the lower court to evict Palestinians will be upheld or whether these families could appeal. Many human rights campaigners believe that if the Palestinians lose the court battle, it could set a precedent for other areas nearby.