Clash of the titans: Trump set for sumo showdown 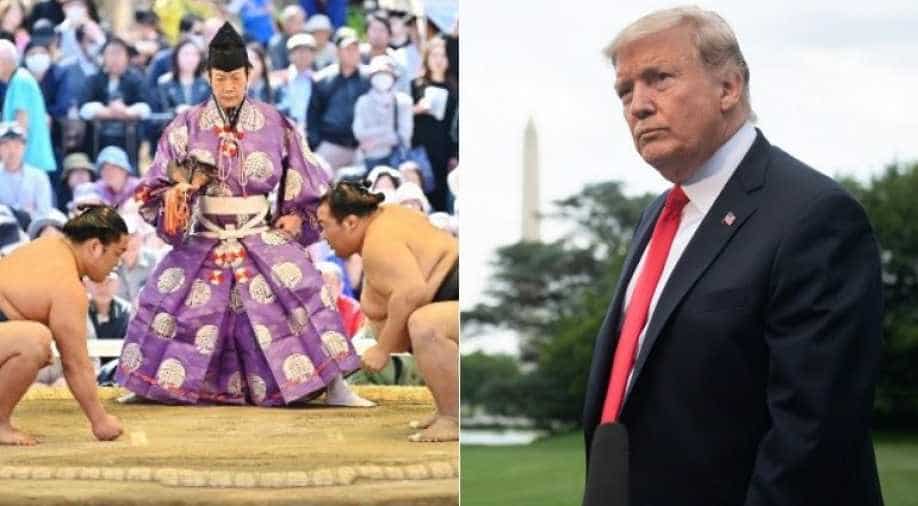 Sumo wrestlers taking part in a "honozumo," a ceremonial sumo exhibition, on the grounds of Yasukuni Shrine in Tokyo. Photograph:( AFP )

A huge pro-wrestling fan, Trump once body-slammed and shaved the head of an American wrestling bigwig during a televised event.

Call it the ultimate culture clash, Donald Trump is going to the sumo, where the brash US leader will watch one of Japan's most ancient and revered sporting traditions.

A huge pro-wrestling fan, Trump once body-slammed and shaved the head of an American wrestling bigwig during a televised event.

But the taciturn and highly-ritualised world of sumo is a world away from the garish costumes, flamboyant characters and scripted bouts beloved of American teenagers.

And opinion in Japan is split over the decision to invite the outspoken president to present a custom-made "Trump Cup" to the winning wrestler in Tokyo this weekend -- an unorthodox turn in a sport steeped in history and solemn ceremony.

Trump won't be the first foreign dignitary to visit sumo's hallowed Ryogoku Kokugikan venue, where Prince Charles and Princess Diana watched some of the 1986 summer tournament.

However, Trump's decision to take in some bouts at the site famously graced by James Bond in the 1967 film "You Only Live Twice" offers plenty of possible security and cultural conundrums.

How, for example, might secret service agents react to the tradition of sumo fans hurling their seat cushions when a "yokozuna" (grand champion) is toppled -- a rowdy celebration that could leave their boss in the line of fire.

Since, as a mere president, he won't be sitting in the Imperial box -- unlike royals Charles and Diana -- Trump will have to make do with a ring-level box close to the action.

That box should be far enough away to keep him safe from the occasional spill, which sees a sweaty 150-kilogram (330-pound) wrestler land in the lap of an audience member -- an event that would be sure to send the internet into a frenzy.

While those around him will be seated on cushions on the floor, the 72-year-old has been given special dispensation to use a chair.

But it is not yet clear what other concessions have been made for the guest of honour -- whether, for instance, he will be required to remove his shoes when presenting his trophy.

Tradition dictates that the dirt ring is hallowed ground.

Last year the Japan Sumo Association caused outrage when women, who are forbidden from entering the dohyo, were asked to leave a sumo ring where they were treating a local official who had collapsed.

Aficionados of the roly-poly sport are torn over Trump's visit.

Other heads of state have been to the sumo.

Former French Preside was an avid fan, even christening his pet dog Sumo -- before banishing the Maltese to the countryside after the animal reportedly became "depressed" and bit him.

But Trump's apparent interest in the sport could end up hurting sumo enthusiasts, because of the heavy security required for the presidential visit.

A large chunk of seats are expected to be blocked off for police and security and exits will be locked after the day's final bout to allow the guest of honour to leave.

"The hassle getting in and out of the venue will be awful," predicted Buckton.

The cloistered world of sumo, which historians agree on dates back some 2,000 years, has been rocked by a series of damaging scandals in recent times.

While allegations of drug abuse, bout-fixing and links to organised crime have tarnished its reputation, the bullying death of an apprentice wrestler in 2007 plunged the sport into crisis.

Buckton believes sumo's rehabilitation will not be helped by Trump's visit.

"I don't think it's what sumo needs at the moment," he said.

"Some might even see it as degrading the sport."

"Trump doesn't help the sport's cause," shrugged the 63-year-old pharmacist. "He has his own issues after all."

But others believe Trump could help boost sumo's battered image.

"To have an American president watch Japan's national sport is amazing," insisted florist Kanako Tanabe, 46. "It will be a proud moment."