Chinese critic who urged US to 'tear down' China's censorship jailed 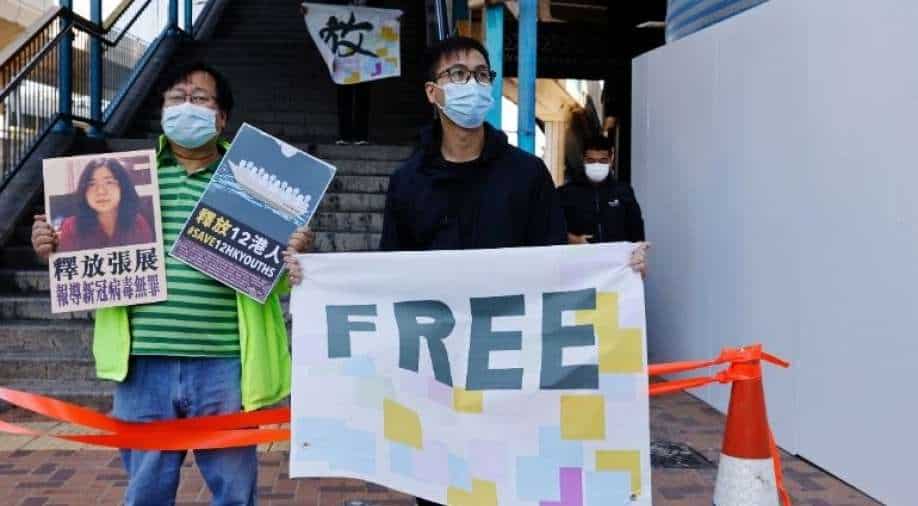 Pro-democracy supporters protest to urge for the release of 12 Hong Kong activists arrested as they reportedly sailed to Taiwan for political asylum and citizen journalist Zhang Zhan outside China''s Liaison Office, in Hong Kong Photograph:( AFP )

In 2014, Jialong met former US Secretary of State John Kerry in Beijing, and reportedly asked Kerry to help ''tear down the Great Firewall of censorship''

Over a year ago, Jialong was detained by Chinese police for reportedly ''picking quarrels and provoking troubles'' - a common accusation in China against activists and journalists. In 2014, Jialong met former US Secretary of State John Kerry in Beijing, and reportedly asked Kerry to help ''tear down the Great Firewall of censorship''.

The Chinese firewall prevents the country's citizens from accessing foreign sites like Google, Twitter, Facebook among many. In addition, it also prevents people from reading news that may be perceived as critical of the Chinese Communist Party. Zhang's wife - Shao Yuan learned of the sentence on Friday.

"Our child and I have been looking forward to his return... the process has been very long and very painful'', AFP reported her as saying. "But at the same time, I'm sad and worried... I'm sad because... such a righteous and kind person was taken and sentenced", she added.

Shao further claimed that content pushed out by Zhang on social media, including his tweets about human rights and internet freedoms were shown as evidence in the court. Shortly after meeting Kerry, Zhang was fired from his job at Tencent, an internet firm. Since then, he has maintained a low profile.

This is among many such detentions for the journalist, who was detained for three days in 2011 for his posts about the removal of an artist's workshop in Shanghai. The artist, Ai Weiwei's workshop was demolished in 2011.

Jialong has remained in detention since August 2019. But this time counts towards his sentence. Based on the sentencing, he is most likely to get released before Chinese New Year.