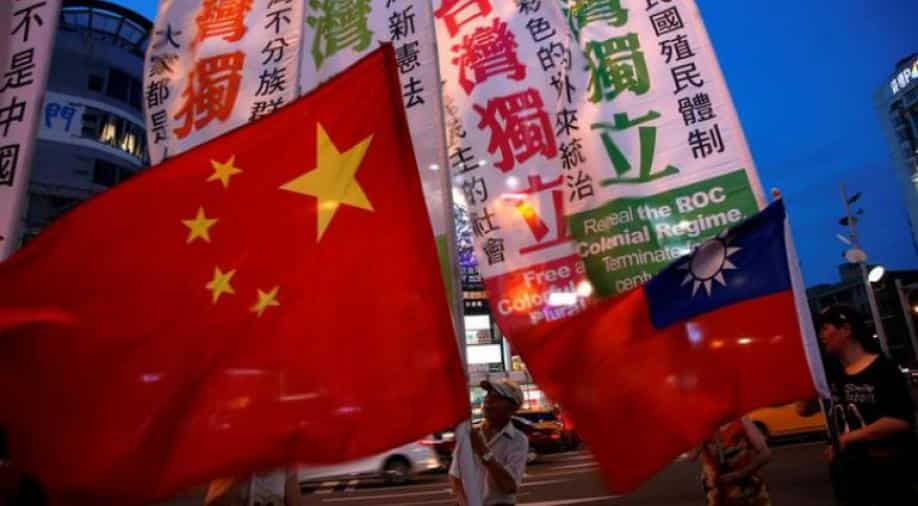 File photo: Members of a Taiwanese independence group march with flags around the group of pro-China supporters in Taipei. Photograph:( Reuters )

Taiwan is set to start the "Han Guang exercise" in which the military says it will conduct "computer-simulated war games".

In a move which further fueled tensions, Chinese aircraft flew around Taiwan today which the Air Force said was meant for "combat military drills".

China has racked up pressure on Taiwan in recent months conducting naval and air excercises close to Taiwan waters, a move which the Taiwan government has described as "military intimidation".

Ma Xiaoguang, China's spokesman of the Taiwan Affairs Office of the State Council had said on Wednesday that his country will unite with "Taiwan compatriots, overcome difficulties and remove obstacles" to pursue the "bright prospect for the peaceful development of the cross-Strait relations."

Taiwan is set to start the "Han Guang exercise" in which the military says it will&nbspconduct "computer-simulated war games". The military exercise is meant for combat readiness in case of an attack by China.

Taiwan media had reported that it won't be conducting live-drills given the changing nature of its armed forces instead it will devise a "new military strategy".

China does not recognise Taiwan as an independent country and has often hit out against US-Taiwan relations even as President Trump has tried to boost relations between the two countries.