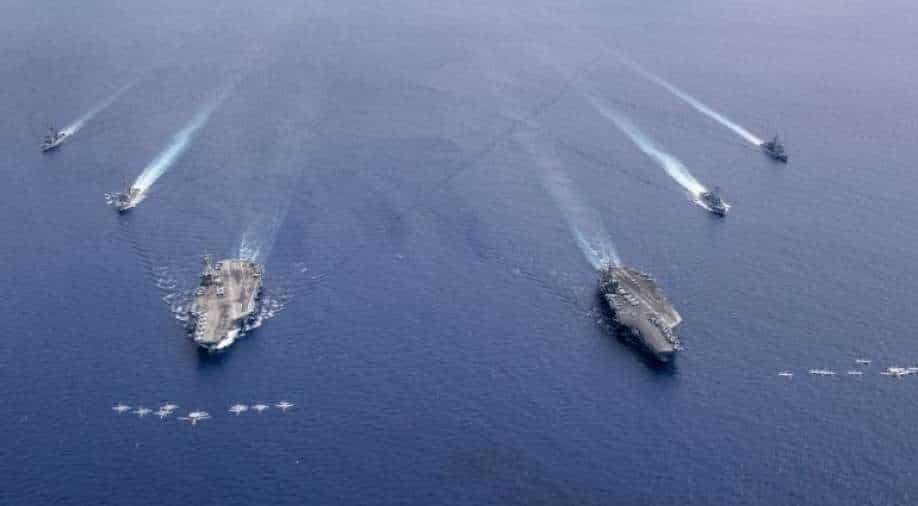 Representative | This US Navy photo released July 7, 2020 aircraft from Carrier Air Wings (CVW) 5 and 17 as they fly in formation over the Nimitz Carrier Strike Force, the aircraft carriers USS Nimitz (CVN 68)(R), and USS Ronald Reagan (CVN 76) as their c Photograph:( AFP )

"U.S. (vessel) did not get approval from the Chinese government and made an unauthorised entry into the sea around China's Paracel Islands, which violated China's sovereignty and security," said Zhao Lijian Chinese foreign ministry spokesman.

Chinese military's Southern Theater Command said in statement that Curtis Wilbur entered the waters without permission, adding that its ships and planes followed the U.S. vessel and "expelled" it.

The US Seventh Fleet described it as a "routine" transit.

The South China Sea has become one of many flashpoints in the testy relationship between China and the United States, with Washington rejecting what it calls unlawful territorial claims by Beijing in the resource-rich waters.

The US has often carried out freedom of navigation exercises in the South China Sea. This has been a cause of friction between the two countries.

The South China Sea and its various islands are claimed by multiple countries including China, Taiwan, Vietnam, Japan, Malaysia and the Philippines.