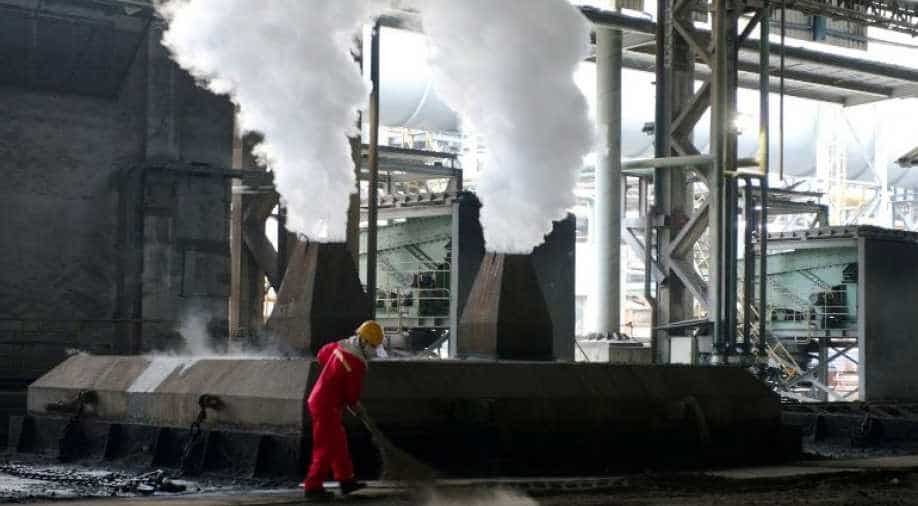 A worker is seen at the workshop of a steel mill in Huaian Photograph:( Reuters )

China will continue to enforce production restrictions in heavy industry in winter this year and will tighten its emission assessment on steel mills when granting exemptions from curbs already in place, an environment ministry official said on Saturday.

With increasing discontent over large-scale industrial shutdowns, Beijing has vowed to adopt more effective and targeted measures during its war against air pollution by imposing different levels of output cuts on companies based on their emission situation.

"The steel industry remains a major contributor of pollutants despite improvement in emission levels and production restrictions.

This year, there will not be many first-class firms that will be exempt from curbs," Liu Bingjiang, the head of the atmospheric environment department at Ministry of Ecology and Environment (MEE), told an industrial conference.

Liu said MEE will bring in industrial associations to carry out emission assessments on mills to avoid fraud in the emission upgrading process.

"We will hand out severe punishment to mills who play tricks and will enforce the highest level of production restrictions on them," said Liu, adding that he had noticed that investment and operational costs of emission upgrade at mills varied from less than 20 yuan ($2.91) a tonne to as high as 270 yuan a tonne in steel-making.

China, the world's biggest steel producer, has ordered mills in key regions, including Beijing-Tianjin-Hebei, the Fenwei Plain and the Yangtze River Delta, to meet ultra-low emission standards by 2020.

That would include more than 60% of steel capacity in the country.

Companies who attain "ultra-low" emission standards are entitled to be exempt from or are allowed to implement a minimum level of production cuts during smog days.

However, an executive at the China Iron and Steel Association (CISA) at the same conference warned of insufficient "clean capacity" in the steel industry despite the record high output.

"I hope the government can adopt fair measures in its anti-smog campaign by protecting and supporting clean and advanced steel producers," said CISA Chairman He Wenbo.

In the first five months of this year, China's crude steel output increased by 10.2% from a year earlier to reach 404.88 million tonnes.

Of the incremental output, 54% comes from small steel firms whose emission level is typically lower compared with their mid- and big-sized rivals, He said.

"Mills are investing huge amounts of money to improve their emission levels...they are the real heroes in the war against pollution."