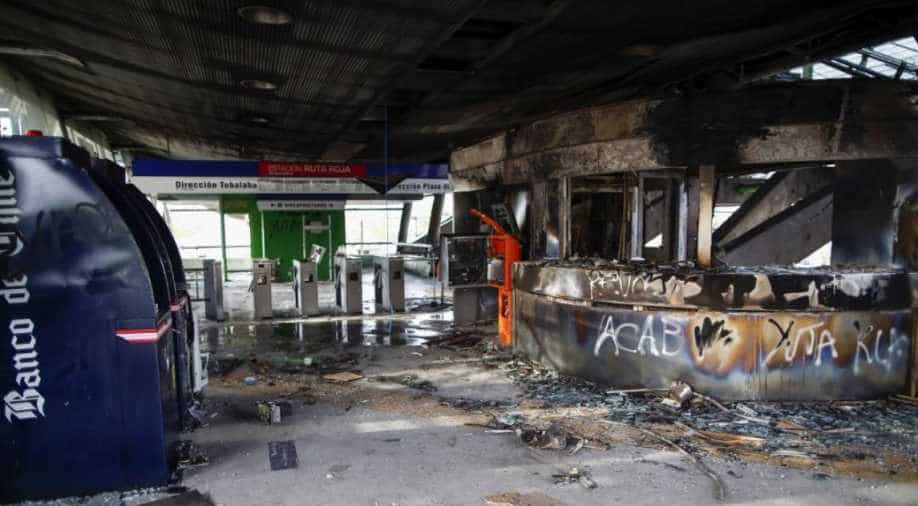 Residents of Chile's capital awoke Saturday to a ravaged city as burned-out buses, bikes and garbage littered the streets.

Residents of Chile's capital awoke Saturday to a ravaged city as burned-out buses, bikes and garbage littered the streets after a day of violent protests that prompted the government to declare a state of emergency and call out soldiers to maintain order for the first time in decades.

The stunning spasm of unrest was triggered by an increase in metro fares but reflected much broader anger over economic and social conditions, including a yawning gap between rich and poor in a country considered one of the most stable in Latin America.

"It is sad, but this destruction was people's way of demanding they be heard. Chile was a pressure cooker, and it exploded in the worst way," said a civil servant who gave her name only Maria, waiting to catch a bus amid the detritus of Friday's protests.

Soldiers patrolled some parts of the city Saturday in their first such deployment since Chile returned to democracy in 1990 after the Augusto Pinochet rightwing dictatorship. But there was no sign of them outside the presidential palace.

Conservative President Sebastian Pinera called them out in the wee hours of the night after the worst violence the city has seen in years.

Throughout Friday, rampaging protesters clashed with riot police in several parts of the capital, and the subway system was shut after attacks on stations. A total of 41 stations were destroyed, some completely charred.

The system was closed altogether on Saturday, and no one knows when it will reopen.

The Santiago Metro, at 140 kilometres, is the largest and most modern in South America and a source of great pride for Chileans.

The general placed in charge of security, Javier Iturriaga, said some 500 soldiers are patrolling the streets. Things calmed down in Santiago, a city of seven million, overnight, he said.

"This morning, the city is quiet," he said.

More than 300 people were arrested, and 156 police were injured, as were 11 civilians.

The state of emergency is initially set for 15 days and restricts freedom of movement and assembly. Due to the emergency, the National Football Association has suspended matches this weekend.

Iturriaga said the military would patrol major trouble spots but would not impose a curfew at present.

Violent clashes escalated as night fell, and the headquarters of the ENEL Chile power company and a Banco Chile branch, both in the city centre, were set on fire.

The ENEL tower blaze was put out with no one injured, firefighters said.

Barricades were erected in several parts of the city, and masked protestors armed with sticks and stones clashed with riot police, who repelled them with water cannon and tear gas.

Residents in many districts of Santiago banged their pots in a show of support for the protestors.

The unrest started as a fare-dodging protest mainly by students against the hike in metro ticket prices, which increased from $1.13 to $1.17 for peak-hour travel, following a 20 peso rise in January.

The fare hike was blamed on rising oil prices and a weaker peso.

There had been several fare-dodging actions in recent days, organized on social media, but the protests escalated Friday, tapping into general discontent among many Chileans.

Chile has the highest per capita income of Latin America at 20,000 dollars, with expected economic growth this year of 2.5 per cent and just two per cent inflation.

But there is an undercurrent of frustration with rising health care and utility costs, low pensions and social inequality.

The metro fare hike served to wake up a society that was averse to violence after the horrors of the Pinochet dictatorship from 1973-1990, which left more than 3,200 people dead or missing, sociologists say.

However, tech-savvy younger Chileans, who did not live through that dark period, are leading the current protests.

"I think social media explains the coordination and synchronized nature of the actions that destroyed infrastructure yesterday," said Santiago Marcelo Mella, and analyst at the University of Santiago.

He said the government was "perplexed and dazed" by the eruption of violence, and this "must make us think about the quality of the intelligence services.

"One gets the feeling that the government reacted too slowly," he said.