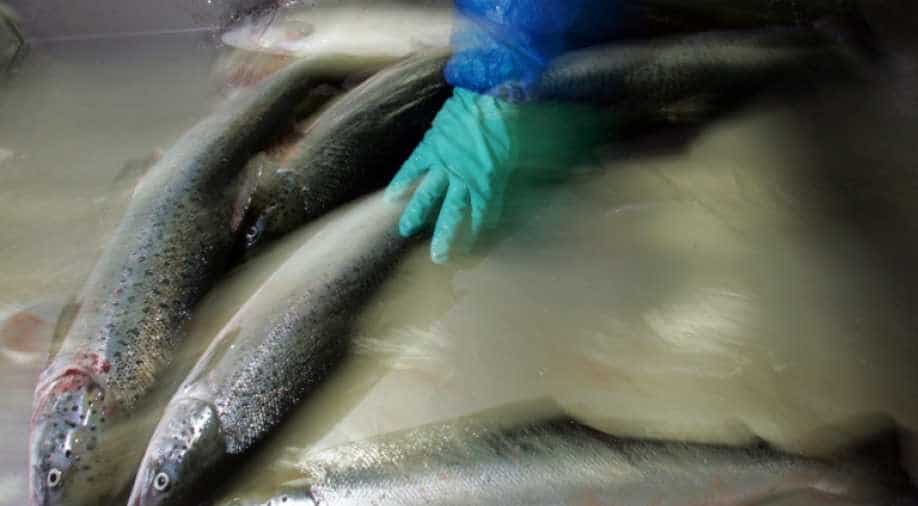 Chilean salmon industry is the second largest in the world Photograph:( AFP )

The fine, handed to salmon farming company Mowi, was the largest ever for an environmental offence in the country.

Chile has slapped a record $6.6 million fine on a Norwegian salmon producer for the 2018 escape of 690,000 antibiotic-fed fish.

The fine, handed to salmon farming company Mowi, was the largest ever for an environmental offence in the country.

Chile's environmental protection service said Friday the humongous charge of 5.3 billion pesos ($6.6 million) was in response to the "irreparable environmental damage produced by the mass escape of salmon" from the Punta Redonda farm in Chile's Los Lagos region, around 1,000 kilometers (620 miles) south of the capital Santiago. The service also handed the company an additional 2.7 million peso fine "for not having adequate facilities to dispose of dead fish."

The salmon were given antibiotics that are unsuitable for human consumption. They escaped after their cages were damaged by a storm.

The escape poses an environmental risk because the fish are an invasive and predatory species which are likely to cause a reduction in the number of endemic species in the region and alter the marine habitat, the service said.

It added that the salmon also present a risk to the wild fauna and salmon from other farms due to the possibility of transmitting pathogens and disease.

The Chilean salmon industry, the second largest in the world, uses 1,400 times more antibiotics per tonne than farms in Norway.