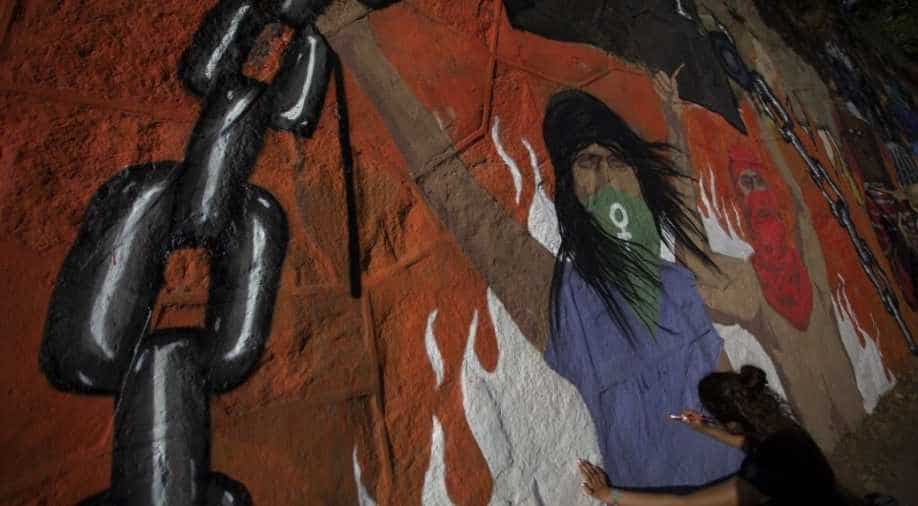 A woman takes part in a mural painting activity as homage to the people dead during the Chilean social outbreak at the banks of the Mapocho river in Santiago on November 23, 2019. Photograph:( AFP )

The subway network, one of Latin America's most modern, continues to run at half-strength, with more than 20 stations still closed after arson attacks.

A month of intense protests against inequality and police repression in Santiago have transformed the Chilean capital's streetscape into a caterwaul of graffiti whose messages reflect the deep discontent in this once genteel Latin American city.

The warm, dry air typical of springtime now bears the lingering sting of teargas, and shops and office blocks have become fortresses, adorned with metal curtains to protect them from demonstrators' stones or Molotov cocktails.

Commuters move past blackened barricades smoldering across many streets and take their chances at busy road junctions where traffic lights have been vandalized.

The subway network, one of Latin America's most modern, continues to run at half-strength, with more than 20 stations still closed after arson attacks.

Grey and sandstone walls have been blanketed with colorful murals.

"The street is ours," proclaims one message on a closed gate. Walls bear war cries, jokes, political demands, rejections of injustice and inequality and claims against "murderous" police.

President Sebastian Pinera is addressed frequently and bluntly, with one scrawl reading: "Resign. Nobody wants you."

The messages also reflect a horrifying, and largely unique, characteristic of the Chilean protests: the injuries to more than 200 people's eyes by police rubber bullets or tear gas cannisters.

"Now it is a privilege to have both eyes," spits one. A poster shows Chile's long thin nation cascading as a stream of blood from an injured eye.

Police insist they have followed protocol in the use of force and that all allegations of wrongdoing that have been reported will be thoroughly investigated.

The police chief last week suspended the use of rubber bullets and ordered further tests after a university study suggested they were only 20 per cent rubber and contained lead.

In Plaza Italia, rechristened Plaza de la Dignidad for having been the focal point for mass mobilizations, parts of the pavement have been ripped up and a statue of a military hero mounted on horseback has been swathed in flags, scarves and paint.

There, some find the city's changed face heartbreaking while others see it as emblematic of broader changes that must come.

"I far prefer this painted and awakened Chile to a passive and quiet oasis," said Miguel Delso, a 32-year-old architect, who was demonstrating with a group of colleagues and architecture students.

Antonio Rivas, a 25-year-old Venezuelan engineer who migrated to Santiago, saw things differently: "I don't understand why, to ask for fair and just treatment, you have to go out and destroy everything," he said as he took pictures on his cell phone of paint-streaked walls.

On the four-lane Alameda thoroughfare that marchers stream down towards Plaza Italia each afternoon, traffic is replaced by enterprising street vendors offering demonstrators everything they might need to make their point.

T-shirts with diverse slogans reflect the long list of causes, while flags and scarves share the pavement with gas masks, eye goggles, slingshots and nets of marbles and spray bottles of water and bicarbonate of soda, to neutralize the effect of teargas.

In Lastarria, the most popular tourist area of downtown Santiago, a mural reinterpreting Pablo Picasso's celebrated Guernica features Pinera as a snorting bull, police special forces as horses, clouds of teargas, flames from burning metro stations and rubber bullets in the air.

A little further, a poster bears a picture of massive crowds, with words of promise, or of warning: "Never again will they have the comfort of our silence."