Charity ship seeks port for 356 rescued migrants in the Mediterranean 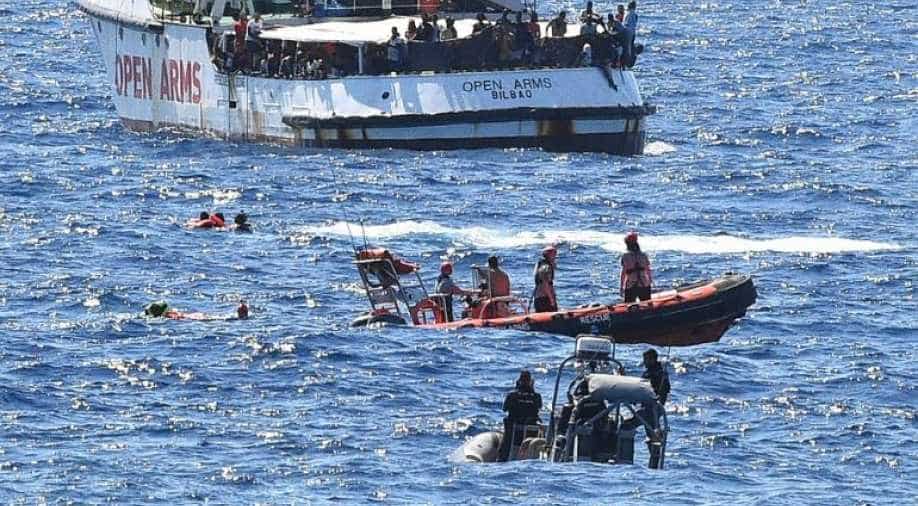 The crew have been at pains not to relate the travails of the Open Arms charity rescue vessel which finally disembarked its 83 migrants on Italy's Lampedusa island.

The organisation running a charity ship in the Mediterranean voiced hope Wednesday for a safe port for its 356 rescued migrants after another NGO vessel docked in Italy, ending a week-long standoff.

The Ocean Viking operated by French charities SOS Mediterranee and Doctors Without Borders (MSF) has been holding its position for 10 days between Malta and Lampedusa, asking for a safe port.

"As maritime law stipulates, we've been asking Italian and Maltese search and rescue coordination centres for a safe port since we made our first rescue on August 9," said Frederic Penard, head of operations for SOS Mediterranee.

"For the time being we've had no reply from Italy and a rather negative one from Malta," he said.

The crew have been at pains not to relate the travails of the Open Arms charity rescue vessel which finally disembarked its 83 migrants on Italy's Lampedusa island overnight Tuesday.

They were allowed to disembark after a local prosecutor ordered the ship seized as part of a probe into far-right Interior Minister Matteo Salvini for preventing the ship docking.

Many had been on the Open Arms for 19 days.

The Ocean Viking crew did not want a repeat of scenes aboard the Open Arms which saw desperate migrants jumping into the sea in the hope of swimming to Lampedusa, although word has now spread that that ship has docked.

"We know that several European states want to end these ad hoc solutions and set up a system" to handle migrants," said Penard.

"That's what we're asking for but these people must disembark now: you can't have negotiations when you've got more than 300 people trapped at sea in difficult conditions."

Malta at the last minute blocked the vessel from approaching to take water and fuel, so the Ocean Viking and those on board are trying to consume as little as possible.

Many of those on board have fled war zones or been tortured and abused in Libya.

"Not only are these people continuing to suffer from a prolonged sea journey, but others will continue to die because we're prevented from continuing our rescue operations," said MSF's head of mission in Libya, Sam Turner.

According to the Libyan coastguard, "around half of the boats which set off are lost at sea, meaning hundreds of people are disappearing without a trace", said Turner.