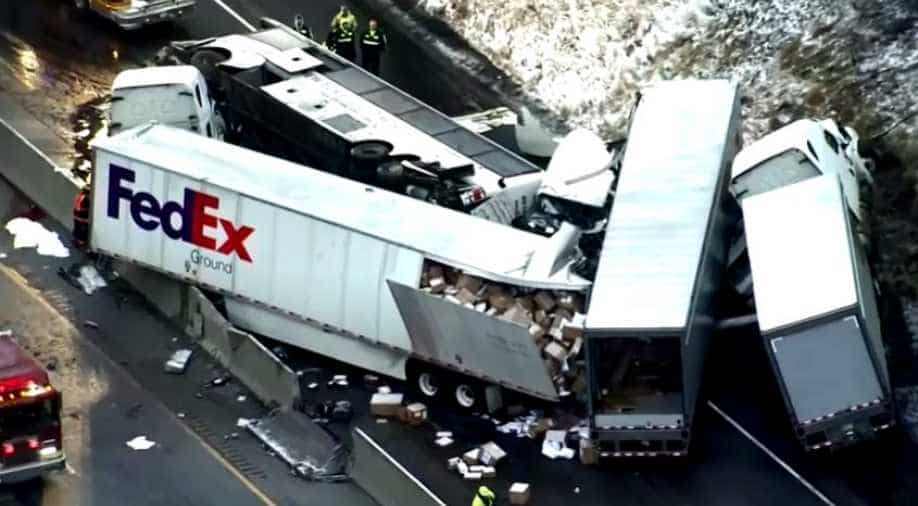 The accident forced the closure of an 86-mile (138-km) stretch of the turnpike, a major east-west highway across the state, in both directions between the exits for New Stanton and Breezewood, adding to post-holiday travel woes in the region.

A chain-reaction crash involving a tour bus, three tractor-trailers and a passenger car killed five people and injured about 60 others on the Pennsylvania Turnpike near Pittsburgh early on Sunday, state police said.

National Transportation Safety Board (NTSB) investigators began arriving hours later in Mount Pleasant Township, about 40 miles (64 km) southeast of Pittsburgh, to determine the cause of the pre-dawn pileup.

The accident forced the closure of an 86-mile (138-km) stretch of the turnpike, a major east-west highway across the state, in both directions between the exits for New Stanton and Breezewood, adding to post-holiday travel woes in the region.

The highway was reopened about 16 hours after the crash, state police said.

The tour bus was headed downhill when it swerved into an embankment at a bend in the road and rolled over on its side, state police spokesman Stephen Limani told a news conference hours later.

Two tractor-trailers then plowed into the bus and a third big rig slammed into the other trucks in a chain reaction that also involved a car, Limani said. All three trucks, at least one belonging to FedEx Corp, were hauling shipments of packages, he said.

Five people from the entangled vehicles were killed and about 60 others were injured, two of them described as critically hurt, although all of those taken to hospitals were expected to survive, according to Limani. Three area hospitals took in a total of 57 patients from the accident, according to a state police tally.

Limani said the bus, owned by Z&D Tour Inc, was en route from Rockaway, New Jersey, where the company is based, to Cincinnati. But Z&D owner Chen Dan Yu said the ill-fated bus trip originated from Manhattan's Chinatown district and was headed to multiple Ohio destinations, the New York Times reported.

Chen told the Times that Z&D had contracted with a Chinatown company called Ohio Coach for ticket sales on that route, which he said his company drives daily.

Emergency personnel also faced a language barrier as some of the bus passengers spoke only Japanese, while others spoke only Spanish, Limani said. The injured ranged in age from seven years old to some believed to be their 60s, he said.

The cause of the crash remained under investigation. But Limani said some motorists reported deteriorating weather conditions at the time of the accident in an area that lies in the snow belt of western Pennsylvania.

"There was some precipitation that was coming down, and I'm sure that could have played a factor," he told reporters. A state transportation official told reporters that road crews had been out overnight applying salt and ash to icy spots on the highway.

NTSB spokesman Eric Weiss said crash investigators would be looking to see if the bus was equipped with an electronic data recorder similar to the "black boxes" carried on aeroplanes.

4 people including two policemen killed as protests erupt in Iraq