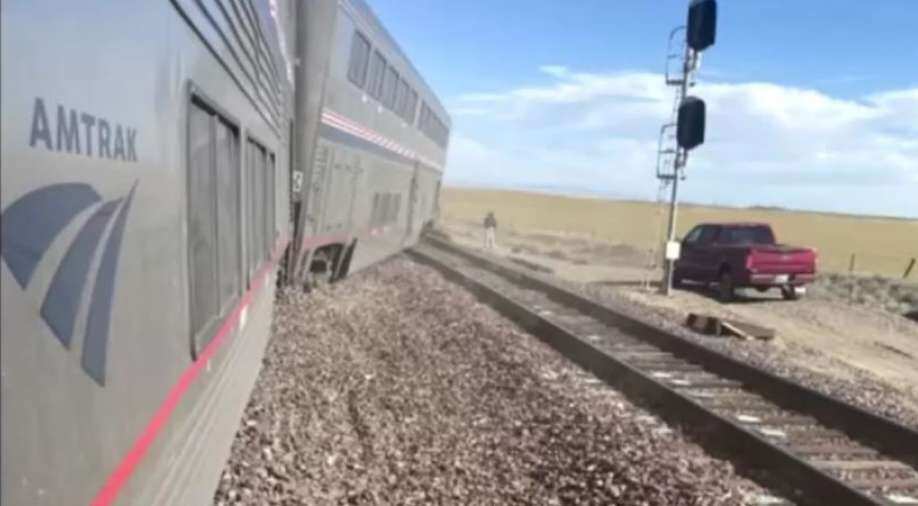 Officials have not released any information on what they suspect caused the train to derail as it was travelling though an apparently flat and straight section of the route.

Steve Glaser was in sleeper car No. 730 on Saturday, watching “The Great British Baking Show” on his cellphone and looking forward to the moment his Amtrak train would leave the flat prairie of central Montana for the high mountain passes of Glacier National Park, when the train jerked violently. Instantly, he realized it had derailed.

His car did, but others toppled over, sending passengers flying through the cars. When the train, which also included two locomotives, came to a stop, Glaser, 66, and another passenger worked together to pry open a window. He grabbed his briefcase and stepped outside to find train cars strewn along the track and other passengers injured.

Eight of 10 passenger cars had jumped off the tracks when the train carrying 145 passengers and 13 crew members derailed near Joplin, Montana, killing three people and injuring dozens more. As of Sunday afternoon, five people from the crash remained hospitalized at Benefis Health System in Great Falls, all in stable condition.

Officials have not released any information on what they suspect caused the train to derail as it was travelling though an apparently flat and straight section of the route. The wreck is under investigation by the National Transportation Safety Board.

“The single largest cause of derailments and accidents are what are called human factors,” said Allan Zarembski, director of the Railroad Engineering and Safety Program at the University of Delaware.

But in this case, he said, the human factors that might cause an accident like this didn’t appear to be present. “More than likely, something broke.”

Excluding human error, he said, most wrecks are caused by faulty equipment — maybe a wheel or an axle, or the track itself.

The train derailed on tracks owned and maintained by BNSF Railway Co., a freight railroad. A BNSF spokesperson, Matt Brown, said Sunday that the section of track where the train derailed was last inspected on Sept. 23.