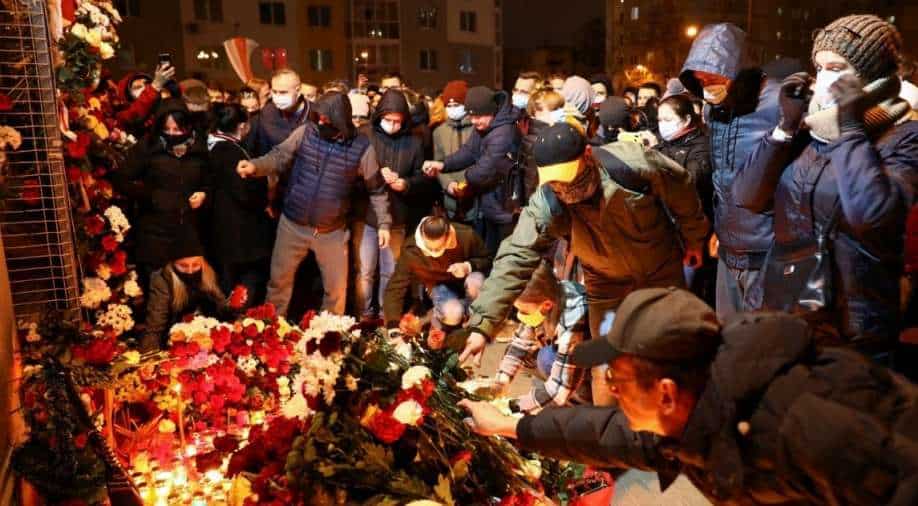 People gather to mourn the death of anti-government protester Roman Bondarenko who they say was beaten by Belarusian security forces in Minsk, Belarus Photograph:( Reuters )

Thousands of people carrying candles and flowers gathered in Minsk on Thursday to mourn the death of a protester who was pronounced dead the day after police arrested him.

Lining the capital's main thoroughfares, the protesters formed human chains, while dozens more laid flowers at the site where Roman Bondarenko, a 31-year-old former soldier, was arrested on Wednesday.

Witnesses say Roman Bondarenko was detained after scuffling with people in plain clothes who had come to a playground to remove red-and-white ribbons that represent the protest movement against veteran President Alexander Lukashenko.

Bondarenko died in Minsk after police arrested him following a dispute in a city square that has become a regular meeting place for the opposition.

The interior ministry denied responsibility for Bondarenko's death, saying he was killed due to a scuffle with civilians.

The death is the latest flashpoint in months of mass protests against Lukashenko following a disputed presidential election in August. The opposition says Lukashenko rigged the vote to secure a sixth successive term.

Lukashenko denies electoral fraud and, buoyed by support from traditional ally Russia, has shown little inclination to step down. A violent crackdown prompted a new round of Western sanctions on Minsk.

"Astonishing cynicism, cruelty of the regime and blunt ignorance of people's aspirations for changes."

Sviatlana Tsikhanouskaya, who stood against Lukashenko in the election and then fled into exile, called Bondarenko a hero of Belarus.

"Unfortunately, despite all the efforts of the emergency hospital doctors, the patient died," a statement by the health ministry said.

Britain expelled two Belarusian diplomats on Tuesday in response to two of its own diplomats being expelled from Belarus.

London also summoned the Belarusian ambassador to deliver a message that it believes the only way forward is for fresh elections to be held and for those responsible for violence against demonstrators to be held to account.