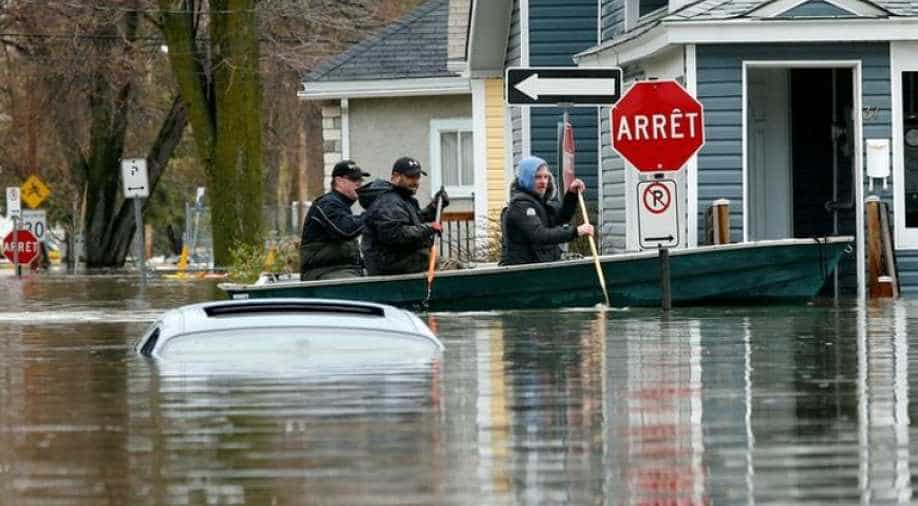 People row a boat in a flooded residential area in Gatineau. Photograph:( Reuters )

A man and a toddler were swept away after their car swerved into a river in the province's eastern Gasp? region on Sunday evening.||||Montreal, Quebec's largest city, declared a state of emergency on Sunday and the military was sent in to assist.

Quebec police hope to send divers into a swollen river on Monday to search for a toddler and a man who were swept away as heavy rains flooded homes and streets and the government sent troops to lay sandbags to protect homes from the deluge.

Schools and government buildings were closed in some areas as the province grappled with the worst flooding in decades.

Montreal, Quebec's largest city, declared a state of emergency on Sunday and the military was sent in to assist.

A Quebec police spokesman said the man and toddler were swept away after their car swerved into a river in the province's eastern Gaspé region on Sunday evening, and that divers would hunt for them if conditions improve.

The man, child and a woman had climbed onto the roof of the vehicle but choppy waters flipped the car over, sending all three into the water, Sgt. Claude Doironthe said. The woman hung onto a branch and escaped; the man and child were swept away and remained missing as of Monday morning, police said.

About 30 police officers and firefighters were patrolling the riverbanks after the weather made helicopter assistance impossible. Three to four divers are expected to join the search.

The floodwaters are expected to peak in Montreal later on Monday, the Quebec public safety minister, Martin Coiteux, told reporters.

The Red Cross asked for donations to provide emergency aid to more than 1,500 displaced by the floods.

"Now we have to start from zero a second time," said Mina Tayarani, 53, whose family moved from Iran in 2004.

Tayarani and her family have been sleeping at a local preschool for two days since their Montreal home was flooded.

The Canadian military has deployed close to 1,600 troops to deal with the aftermath of the deluge. Approximately 60 mm of rain (2.4 inches) fell in eastern Ontario and western Quebec late last week.

Both provinces have been grappling with the impact of heavy spring rainfall.

As of Sunday evening, 146 Quebec municipalities were affected by flooding that inundated thousands of residences and forced the evacuation of about 1,520 people, according to Urgence Quebec.

Canadian Prime Minister Justin Trudeau visited a flooded community on Sunday and helped to fill sandbags in his home province.