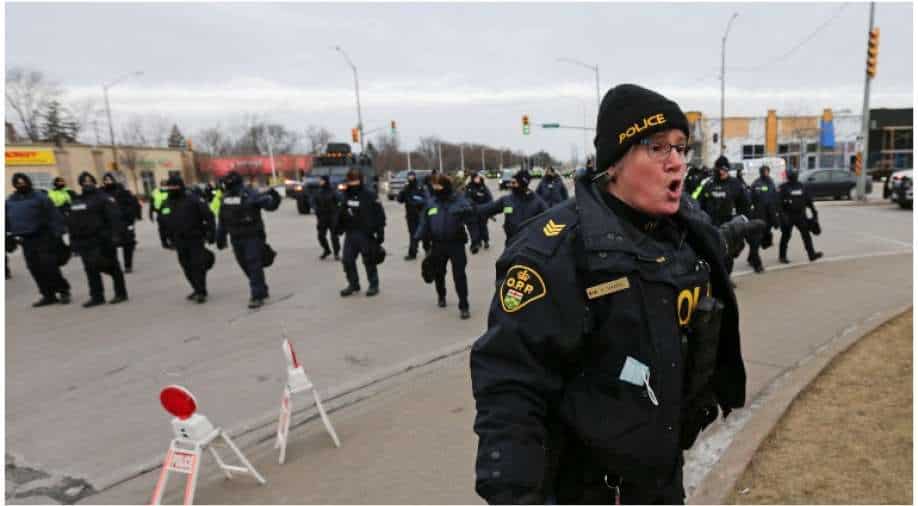 A police officer reacts on the road leading to the Ambassador Bridge, which connects Detroit and Windsor, after police cleared demonstrators, during a protest against coronavirus disease (COVID-19) vaccine mandates, in Windsor, Ontario, Canada February 13, 2022. Photograph:( Reuters )

Several protesters were arrested by Canadian police on Sunday as they cleared protesters and vehicles that had blocked a vital trade route on the border with the US. However the brige was not opened to traffic on Sunday by the time this story was published.

There was a tense standoff between the police and the protesters since Friday. A court order and threats of arrest failed to end six-day blockade of the Ambassador Bridge in Windsor, Ontario.

Windsor Police said in a statement on Sunday they arrested several people on a charge of mischief, without saying how many. Police also seized vehicles within the demonstration area, the statement added.

Police stepped up their presence on Sunday with more than 50 vehicles, including cruisers, buses and an armoured car, as the number of protesters dropped to around 45 from roughly 100 on Saturday. Windsor Police tweeted "there will be zero tolerance for illegal activity".

Counter protests started blocking vehicles trying to join the protests on Sunday in Ottawa, with residents losing patience over the three-week-old demonstrations.

“We’re fed up, we’re tired. We want Ottawa to be boring again,” said an Ottawa resident at a counter protest in front of the city’s police headquarters.

The blockade of the bridge since Monday, North America's busiest land border crossing, has choked the supply chain for Detroit's carmakers.

The bridge carries about $360 million a day in two-way cargoes - 25% of the value of all US-Canada goods trade.

"Today, our national economic crisis at the Ambassador Bridge came to an end," Windsor City Mayor Drew Dilkens said in a tweet. He earlier told CBC News that he hopes the bridge will be open on Sunday.