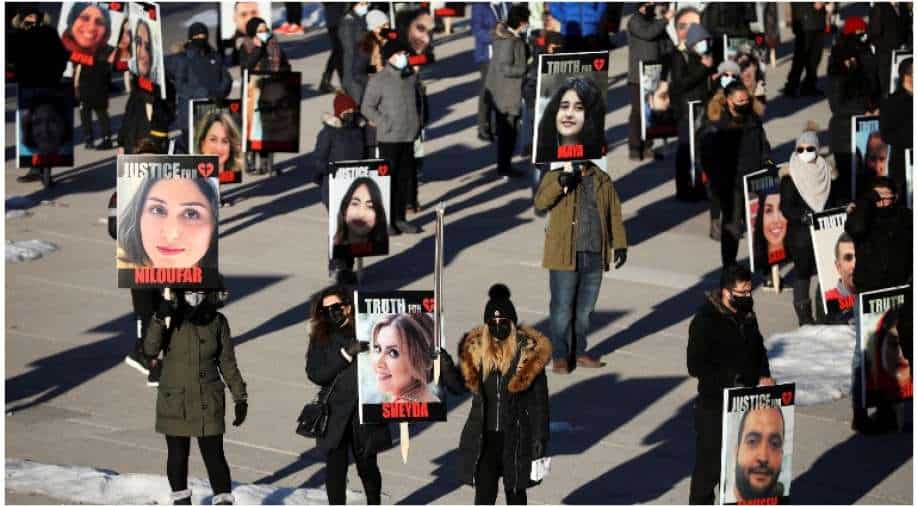 FILE PHOTO: People hold placards with images of the victims of the downing of Ukraine International Airlines flight PS752, which was shot down near Tehran by Iran's Revolutionary Guards, as they gather to take part in a march to mark its first anniversary Photograph:( Reuters )

Iran had shot down Ukraine International Airlines flight PS 572 shortly after takeoff from Tehran. All 176 people onboard were killed

Group of countries led by Canada said on Thursday that they've made reparation claim against Iran over its downing of a Ukrainian jetliner. The countries said that the claim had been made on behalf of victims' families.

Iran shot down Ukraine International Airlines flight PS 572 shortly after takeoff from Tehran. All 176 people onboard were killed. These included 85 Canadian citizens and permanent residents.

The Islamic Republic admitted three days later that its forces had targetted the plane by mistake.

Britain, Canada, Sweden and Ukraine said in a joint statement that the two missile strikes on the plane, as well as Iran's "omissions" in an investigation report on the crash, "amount to breaches of international law."

"Our claim states that our respective countries, nationals and residents onboard flight PS752 were seriously and irreversibly harmed by the tragedy and Iran must fulfill its legal responsibility to make full reparations to the group of states," they said, calling on Iran to formally begin negotiations on reparations.

In a separate statement, the group also announced that Afghanistan would not take part in the upcoming talks as it focuses on domestic strife.

In a final report in March, the Iranian Civil Aviation Organisation (CAO) pointed to the "alertness" of its troops on the ground who shot the missiles amid heightened tensions between Iran and the United States at the time.

Ukraine, which lost 11 citizens in the disaster, has said the report was "a cynical attempt to hide (the) true causes" of the tragedy, while Canada said it contained "no hard facts or evidence."

Canada and the other nations said they're seeking "equitable compensation for material and moral damages suffered by the victims and their families regardless of nationality and in an amount consistent with its obligations under international law."