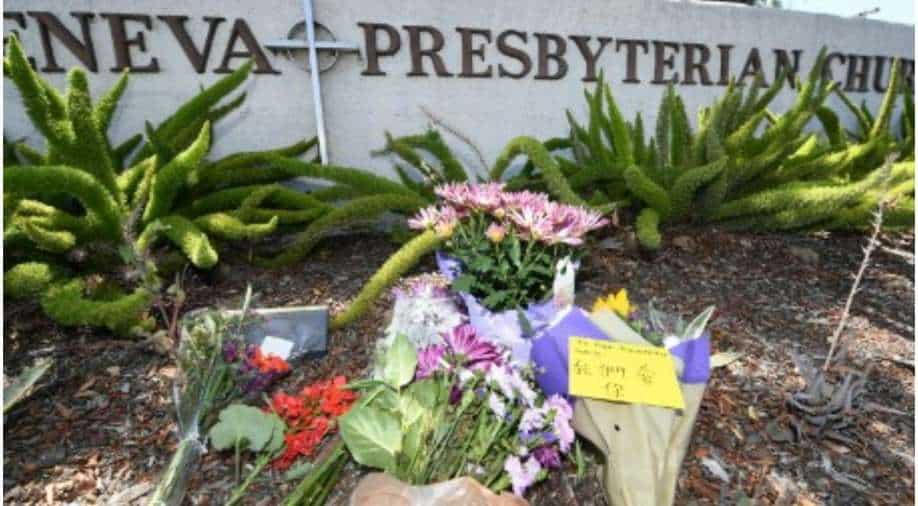 Flowers and notes are seen at a makeshift memorial outside the Geneva Presbyterian Church May 16, 2022 after one person was killed and five injured during a shooting May 15, 2022 at the church in Laguna Woods, California. A Chinese immigrant who padlocked a church and opened fire on its Taiwanese-American congregation, killing one person and injuring five others, was motivated by hatred of the island and its people, US investigators said May 16. Photograph:( AFP )

The shooter, who had deep hatred of Taiwan, was a US citizen born in China

The FBI said that it will investigate Taiwanese church shooting in California as a 'hate crime'. David Chou (68) the shooter is likely facing one count of murder, five counts of attempted murder and four counts of unlawful possession of explosives.

Chou is a US citizen who was born in China. Orange County Shriff Don Barnes said that Chou's violent assault was motivated by his hatred of Taiwan and tensions between the country and China.

Victims of the shootout are all of Asian heritage. Names of the victim have not been made public.

Sherrif Barnes said that Chou chained the doors and placed glue in the lock at Geneva Presbyterian Church in the city of Laguna Woods before opening fire.

In Chou's car, Barnes said, investigators found notes written in Mandarin that indicated an obsession with Taiwan and a dislike of Taiwanese people.

"This is a manifestation of the ugliest part of our humanity that exists in our country today," Barnes said at a news conference on Monday, also referencing the weekend's racist mass shooting targeting Black people in Buffalo, New York.

As Chou began his rampage, Dr. John Cheng, 52, a sports medicine specialist, tackled him and was shot. But Cheng, who Barnes described as a hero, was able to give other congregants, including a pastor, the opportunity to overpower the shooter and tie his legs with an electrical cord, detaining him until sheriff's deputies arrived and broke through the chains on the doors.