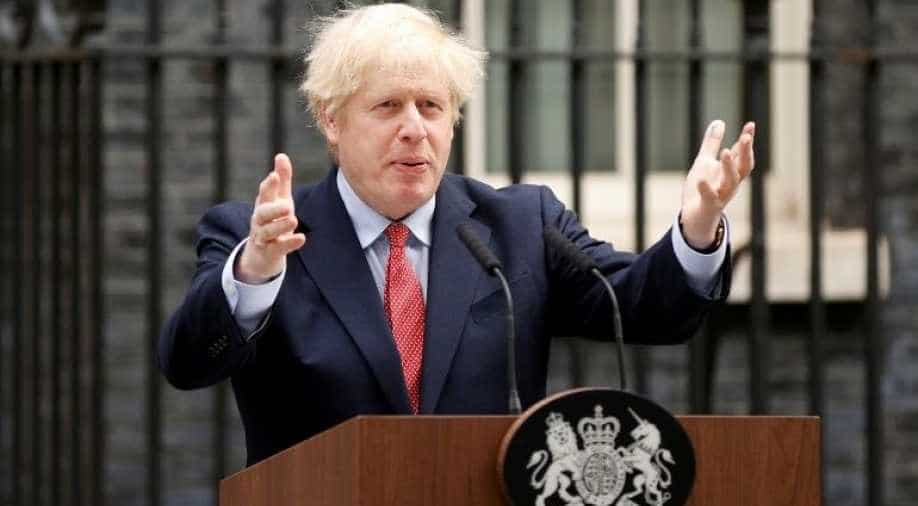 Britain and the United States have been living under the same political weather vane for the past four years, so it is fitting that Prime Minister Boris Johnson is borrowing one of the White House’s most familiar daily rituals, the televised press briefing, for No 10 Downing St.

The fact that Johnson is doing so at a time when the Trump White House’s briefings have become a grim spectacle of patently erroneous claims and base-pleasing antagonism toward the news media is not lost on critics in Britain.

Some worry that a milder version of that cage match could take root in Downing Street. Even if it does not, they warn that a mix of hungry reporters, a close-to-the-vest press secretary and TV cameras will blow up a system that has operated comfortably for decades in a more collegial style. Until now, the prime minister’s spokesman has quietly briefed a designated circle of journalists without being identified by name.

Creative destruction is perhaps what Johnson and his communications aides are after. Televised briefings could be a way to get their message directly to the public, unfiltered by a political press corps that has become increasingly critical of Downing Street over its erratic handling of the coronavirus pandemic.

Johnson has recruited a well-connected former political journalist, Allegra Stratton, who most recently headed communications for the chancellor of the Exchequer, Rishi Sunak. When she takes the podium next month, Stratton, 39, will instantly become one of the government’s most visible officials. Some worry that it is the equivalent of putting a big red target on her back.

“Quite frankly, she’s being sold a pup,” said Bernard Ingham, who served as Margaret Thatcher’s press secretary during her 11 years as prime minister, using a British expression meaning to be tricked into accepting a raw deal. “Look at the background against which she is starting.”

There is little good news for Johnson’s press secretary to promote these days. The virus has hit Britain harder than any other major European country, economically and epidemiologically. The prime minister’s lockdowns are stirring up rebellions from northern mayors and members of his own Conservative Party. Brexit negotiations with the European Union are bumpy and rife with reversals.

“It will deflect criticism from Johnson and his key aides to the press spokeswoman,” said Michael White, a former political editor at The Guardian, who once worked with Stratton. “She is a smart, tough woman, but it’s going to be very difficult for her. It’s a 24/7 job.”

White, who was a Washington correspondent in the 1980s, recalled useful off-camera briefings that President Ronald Reagan’s spokesman, Larry Speakes, held with reporters. Even if those sessions were at times adversarial, they were worlds away from the acrid encounters that reporters now have with President Donald Trump’s current press secretary, Kayleigh McEnany.

“I’m rather afraid that No. 10 wants to use the Trump model and not the Reagan model,” White said. “Using the briefing as a bully pulpit to go directly to the voters, believing that the problem is not their performance but the press.”

Stratton did not reply to a request for an interview, and a Downing Street spokesman declined to discuss her new assignment.

Some critics object to televised briefings on constitutional grounds: They say they may subvert the role of Parliament, where the prime minister and members of his Cabinet are expected to account for government policies. Johnson, who suspended Parliament last year at the height of the debate over Brexit, has come under fire more recently for imposing virus-related restrictions without consulting the House of Commons.

“The PM’s word should always be stronger than that of a spokesman, and in our system that means Parliament,” said Alastair Campbell, who served as spokesman for Prime Minister Tony Blair and is an outspoken critic of the current prime minister. “Johnson is basically still a journalist masquerading as a prime minister, so he always thinks another media fix is the answer.”

Before entering politics, Johnson was the Brussels correspondent for The Daily Telegraph and later the editor of The Spectator, a right-leaning weekly magazine that has close ties to the Conservative Party.

In the incestuous tradition of British politics and media, The Spectator has even closer ties to Stratton. She is married to James Forsyth, a political reporter and editor for the magazine who writes knowing, if anonymously sourced, columns about the machinations inside Downing Street.

Adding to the politics as one large cocktail party vibe, Sunak, the government’s No. 2 official who has recently emerged as something of a rival to Johnson within the party, served as Forsyth’s best man at his marriage to Stratton (they were schoolmates).

“I don’t do spin,” Stratton once said to The Telegraph, an assertion backed up by her former colleagues.

Johnson’s aides hope to build on the success of the coronavirus briefings that the prime minister and his scientific advisers conducted every day as the virus first swept through the country last spring.

Unlike the freewheeling, often fractious, briefings that Trump gave at the White House during the early days of the pandemic, the Downing Street sessions were laden with a sense of national crisis. Reporters asked earnest questions, and the officials offered equally earnest answers. The drama proved a ratings bonanza.

But the ratings waned, and Downing Street stopped holding the sessions regularly. Now, with British solidarity giving way to angry divisions over the government’s lockdown policies, the cordial tone of those briefings would most likely be replaced by the cut-and-thrust of everyday political coverage.

Introducing cameras, former White House press secretaries said, only intensifies that dynamic. Too often, they said, briefings become platforms for showboating rather than well-intentioned efforts to extract or convey information.

“If the press secretary is strong, articulate and fast on her feet, she can represent the PM well,” said Ari Fleischer, who was press secretary to George W. Bush. “But still, it will likely become a TV show that debases everyone.”

There is a reason that Downing Street press secretaries have long been wary of too much visibility. In Ingham’s time, reporters were forced to attribute information from him to a “person close to the prime minister,” a restriction that led papers to briefly boycott Downing Street briefings.

Under Campbell, reporters were allowed to attribute information to the “prime minister’s official spokesman,” but not to Campbell by name — a requirement that still holds in Downing Street today.

Mike McCurry, who as Bill Clinton’s press secretary first allowed live television coverage of White House briefings in 1995, recalled Campbell quizzing him about the merits of the White House approach early in Blair’s tenure as prime minister. But Campbell said he never considered allowing cameras because he believed they would undermine the minister's briefings to Parliament.

McCurry said he now regretted bringing in cameras. Regardless, he said he hoped Johnson’s experiment would be a success.

“The British press is vigorous, and I’m sure the sessions with Stratton will be boisterous,” McCurry said. “But the guiding principle should be: ‘The public has a right to know. The government has an obligation to tell.’ ”