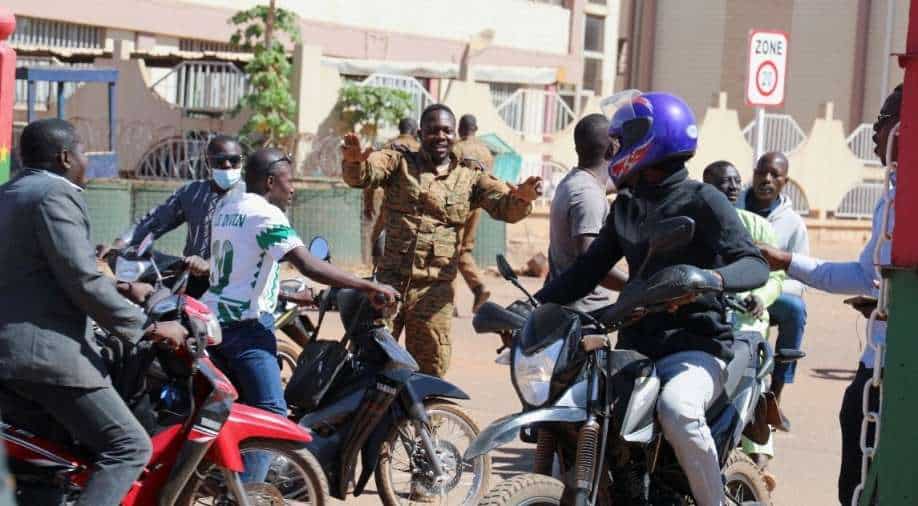 An army soldier asks people to disperse as they gather outside Guillaume Ouedraogo army camp in Ouagadougou, Burkina Faso on January 24, 2022. Photograph:( Reuters )

President Roch Kabore's whereabouts were unknown on Monday, with conflicting accounts of his situation

In the aftermath of a military takeover in Burkina Faso, the United Nations Secretary-General Antonio Guterres has "condemned attempted takeover of government by the force of arms".

UN spokesman Stephane Dujarric said on Monday (January 24) that Guterres has strongly condemned the takeover and also called on the coup leaders to lay down their weapons.

On Monday, Burkina Faso's army informed that it had ousted President Roch Kabore as they announced the takeover on state television.

Dujarric added that Guterres has asked the coup leaders "to ensure the protection of the physical integrity of the president and of the institutions of Burkina Faso".

The statement, signed by Lieutenant Colonel Paul-Henri Sandaogo Damiba and read by another officer, mentioned that the power shift has been done without violence. They also informed that those who are detained were at a secure location.

The army has dissolved the government and the national assembly, suspended the constitution and closed the country's borders as they cited the deterioration of the security situation in the country for the takeover.

The army said Kabore was unable to unite the West African nation and effectively respond to challenges, which include an Islamist insurgency.

The statement was made in the name of a previously unheard-of entity, the Patriotic Movement for Safeguard and Restoration, or MPSR, its French-language acronym.

"MPSR, which includes all sections of the army, has decided to end President Kabore's post today," it said.

Where is President Roch Kabore?

The takeover was announced after two days of confusion and fear in Ouagadougou, the capital, where shootings erupted at army camps on Sunday.

However, the statement by the army appears to be conflicting with what has happened in the past two-to-three days.

Reuters report mentioned that several armoured vehicles belonging to the presidential fleet were spotted near Kabore's residence on Monday. The vehicles were riddled with bullets and one was even spattered with blood.

Security sources gave conflicting accounts of Kabore's situation, with some saying he was being detained by the coup organisers and others saying forces loyal to him had taken him to a secure location.

Kabore's whereabouts were unknown on Monday, with conflicting accounts of his situation.