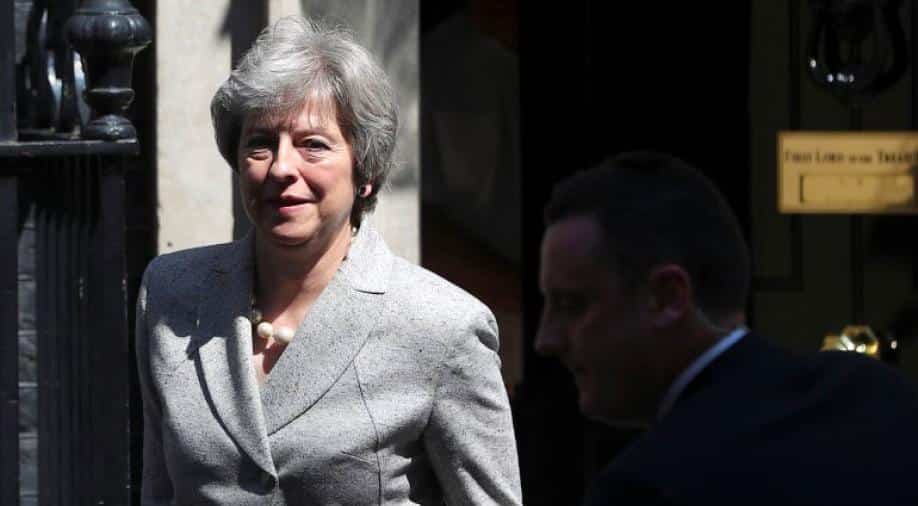 The British cabinet began meeting at 1400 GMT to discuss the accord. The Daily Telegraph newspaper reported two ministers who strongly supported Brexit would quit.

British Prime Minister Theresa May hailed her draft European Union divorce deal on Wednesday but must convince ministers to back her plan amid open hostility from some of her own members of parliament who say it threatens the United Kingdom's unity.

Her minority government means May is the weakest British leader in a generation, yet she must try to get her Brexit deal, struck after more than a year of talks with the EU, approved by parliament before leaving the bloc on March 29, 2019.

"I'm confident that this takes us significantly closer to delivering on what the British people voted for in the referendum," May told parliament. Britons voted 52-48 percent in favour of leaving the EU in 2016.

The British cabinet began meeting at 1400 GMT to discuss the accord. The Daily Telegraph newspaper reported two ministers who strongly supported Brexit would quit.

May's plan is an attempt to forge a balance between those who want Britain to maintain close links to the world's biggest trading bloc while having full control over issues such as immigration and judicial oversight.

"We will take back control of our borders, our laws and our money, leave the Common Fisheries Policy and the Common Agricultural Policy, while protecting jobs, security and the integrity of the United Kingdom," May said of the deal.

But Brexit campaigners in May's Conservative Party, which for three decades has been divided over Europe, said it was a surrender to the EU and they would vote it down.

The Northern Irish Democratic Unionist Party (DUP) which props up May's government, said it would not back any deal that treated the British province differently from the rest of the United Kingdom. Opposition Labour Party leader Jeremy Corbyn called it a "botched deal".

At the heart of May's difficulties has been the so-called Northern Irish backstop, an insurance policy to avoid a return to controls between the British province and EU-member Ireland which could threaten the 1998 peace accord which ended 30 years of violence.

EU sources said the draft accord envisaged a July 2020 decision on what would have to be done to safeguard an open Irish border after the post-Brexit transition runs its course if a new trade deal is not in place.

If not, Britain would have to extend the transition period once beyond December 2020, possibly until the end of 2021, or go into a customs arrangement that would cover all of the United Kingdom but in which Northern Ireland would be aligned more closely with the EU's customs rules and production standards.

Treating Northern Ireland differently risks alienating the DUP who warn it could risk the integrity of the United Kingdom, while Brexit-supporting members of parliament argue it could leave Britain subject to EU rules indefinitely.

NOT WHAT PEOPLE VOTED FOR

"If the media reports about the EU agreement are in any way accurate, you are not delivering the Brexit people voted for, and today you will lose the support of many Conservative MPs and millions of voters across the country," Conservative lawmaker Peter Bone said.

Sterling, which has seesawed since reaching $1.50 just before the 2016 referendum, fell to 1.2944 on news of possible ministerial resignations after briefly jumping more than 1 percent after the deal was announced.

For the EU, reeling from successive crises over debt and immigration, the loss of Britain is the biggest blow yet to 60 years of efforts to forge European unity in the wake of two world wars.

EU leaders could meet on Nov. 25 for a summit to seal the Brexit deal if May's cabinet approves the text, Irish Prime Minister Leo Varadkar said.

The ultimate outcome for the United Kingdom remains uncertain: scenarios range from a calm divorce to rejection of May's deal, potentially sinking her premiership and leaving the bloc with no agreement, or another referendum.

May, an initial opponent of Brexit who won the top job in the turmoil following the referendum, has staked her future on a deal which she hopes will solve the Brexit riddle: leaving the EU while preserving the closest possible ties.

EU supporters say the deal leaves Britain worse off and subject to the bloc's rules without any say in them. Scottish nationalists have demanded that Scotland, where voters backed staying in the EU, get the same special treatment as Northern Ireland.

Conservative lawmakers have to factor in the implications of defeating the deal which could topple May, delay Brexit, pave the way for a national election or lead to a new referendum.

The government has yet to give details of the Brexit deal, which runs to hundreds of pages, although a statement to parliament was likely on Thursday.

Brexit will pitch the world's fifth largest economy into the unknown and many fear it will divide the West as it grapples with the unconventional U.S. presidency of Donald Trump and growing assertiveness from Russia and China.

Supporters argue that in the longer term Brexit will allow the United Kingdom to thrive and strike global trade deals.

Some business chiefs were positive about May's deal.

"My gut feeling is we need to get behind it and we need to make this deal work. What we need is certainty," said Juergen Maier, the UK CEO of German engineering giant Siemens.

But James Stewart, head of Brexit at accounting firm KPMG said: "Until there is broader political alignment and fewer risks, business leaders have little option but to continue to assume that the quest for a deal could yet be derailed."