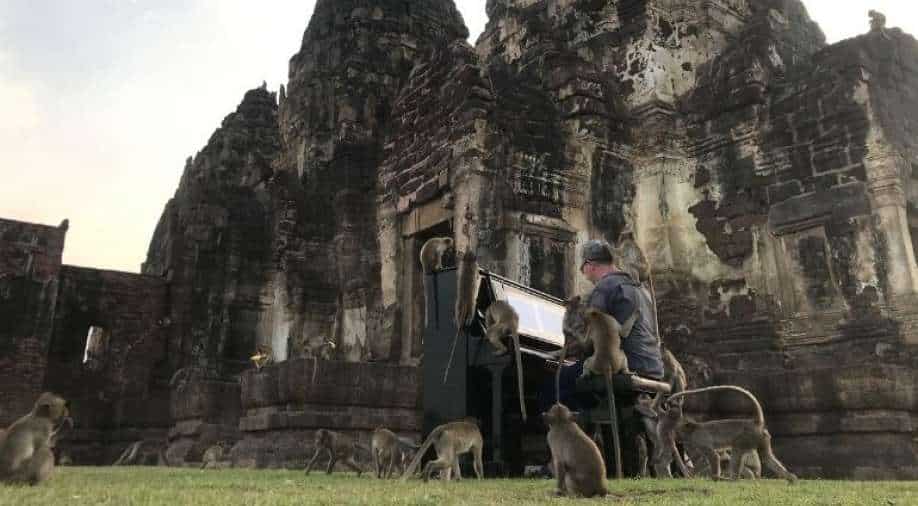 A British musician - Paul Barton recently played for the most unexpected audience - monkeys!

The monkeys in Thailand have grown to love Barton, and can be seen tugging at his hair, and climbing all over the place - literally!

Due to COVID-19 induced lockdown, monkeys in Thailand are not only desolate, but funds allocated for their care have also decreased, Reuters reported.

Given this situation, Barton hopes to bring relief to the animals, who are also receiving less help than usual due to the fall in tourism.

"We need to make an effort to make sure that they eat properly. And when they eat properly they will be calmer and will not be aggressive," said 59-year-old Barton, who has lived in Thailand for a long time. Barton recently played at four venues in Lopburi - notoriously famous for its monkeys. He played at an ancient Hindu temple, a hardware store, and a cinema.

As Barton played Greensleeves, Beethoven, and Michael Nyman, monkeys come running to hear the music, and to sit wherever they please.

The monkeys can be seen sitting on Barton’s stool, some sitting on his shoulders, and a few on the piano.

Small monkeys reportedly ran across piano keys, and many tried to chew off Barton’s music notes. "A wonderful opportunity to see the wild animals just being themselves," Barton told Reuters.

"I was surprised to play the piano and find that they were actually eating the music as I was playing it”, the Briton from Yorkshire said.

"I wasn't going to let those things distract from the project which is to play the music for these wonderful macaques”, he added.

Barton is no stranger to animal audience. He has played Schubert, Bach, Chopin and Beethoven for elephants in retirement sanctuaries for over ten years. Barton wants to study the animals while raising awareness about them.