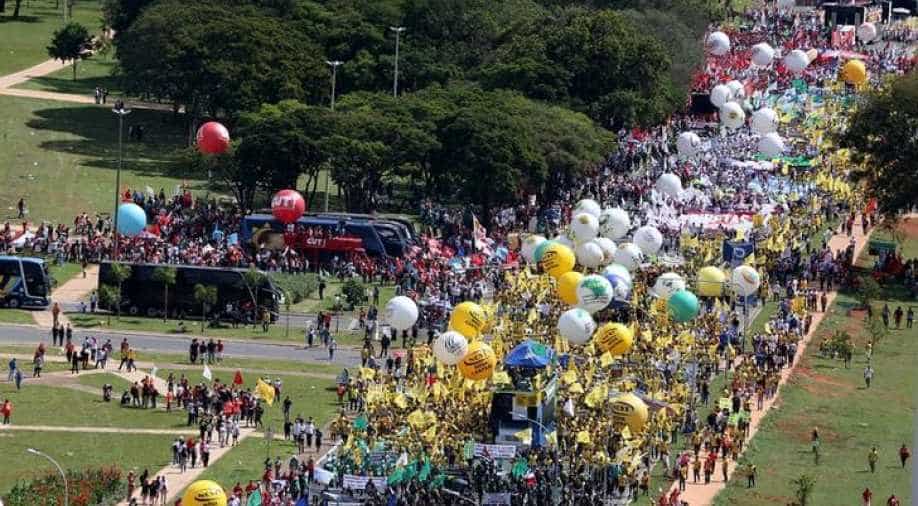 Unions and leftist parties opposed to Temer's labour and pension reforms called the Occupy Brasilia protests to press for his removal. Photograph:( Reuters )

Several thousand protesters clashed with police in the Brazilian capital on Wednesday during a march to demand early elections to replace scandal-hit President Michel Temer and demand that Congress not pass his unpopular austerity policies.

Temer last week refused to resign in the face of new corruption allegations against him and his closest aides, putting his government and its reform agenda on the brink of collapse.

Unions and leftist parties opposed to Temer's labour and pension reforms called the Occupy Brasilia protests to press for his removal.

The large crowd gathered peacefully near Brasilia's national soccer stadium around midday. As they marched toward Congress police unleashed tear gas and stun grenades, and television images showed them clubbing some demonstrators with truncheons. There was no immediate word on injuries.

Riot police set up cordons around the modernistic Congress building where lawmakers met to discuss a post-Temer transition should the president resign or be ousted by one of Brazil's top courts. If that happens, Congress would have 30 days to pick a successor to lead Brazil until elections late next year.

The parties of Temer's main allies are split over whether to quit his coalition immediately or first agree on a consensus figure to replace him and save his reform agenda. The market-friendly measures are considered vital to restore business credibility and investment needed to end a two-year recession.

Outside, the message demonstrators chanted was clear: "Out with Temer!, general election now!"

The unions were galvanised by opposition to a bill that would cut their power in the workplace by allowing temporary non-unionized contracts and ending obligatory payment of union dues.

"Temer can't stay and these reforms that trample on our rights cannot advance. We want direct elections now," said Dorivaldo Fernandes, 56, member of a health workers union in the neighbouring state of Goias.

He said a president chosen by Congress was not acceptable. "We want new people who are clean and can clean up this mess."

Leftist senators, who on Tuesday succeeded in obstructing discussion of the labor reform bill, read out a constitutional amendment in committee that would allow early general elections instead of waiting until October 2018. But chances of changing the constitution in the midst of a political crisis were minimal.

One of the amendment's backers, Senator Randolfe Rodrigues, leader of the Socialist Popular Action party, said Temer's base of support in Congress was falling apart.

"His coalition is distancing itself from Temer because it knows that this is a dying government. The next step is to mobilize support for elections on the streets."