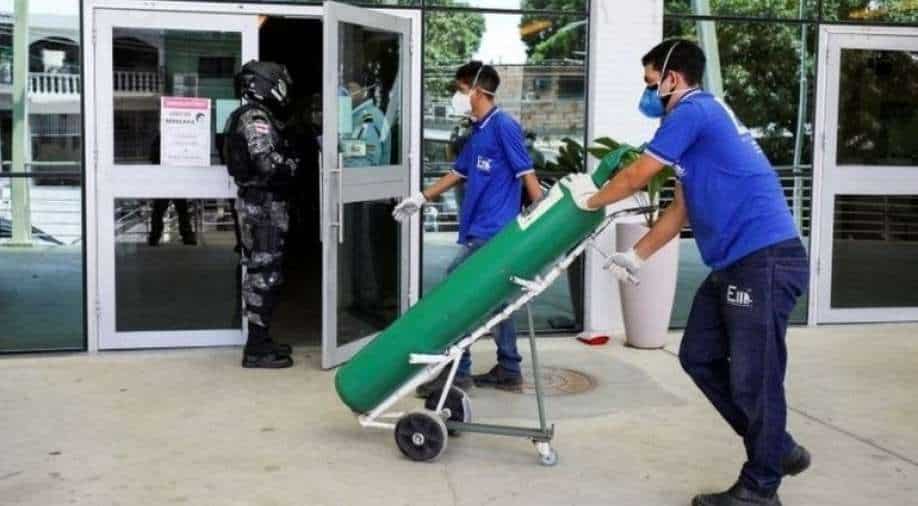 The new wave of Covid-19 has pushed many hospitals to the breaking point, with intensive care beds and oxygen supplies at critically low levels

Hospitals in several states of Brazil have reported a critical oxygen stock levels, loans of cylinders and even transfer of patients who require oxygen.

The new wave of Covid-19 has pushed many hospitals to the breaking point, with intensive care beds and oxygen supplies at critically low levels.

The Pan American Health Organization warned Tuesday that the situation in Brazil was "dire," and threatening the rest of the region.

On Wednesday, Brazil hit a single-day record of 3,251 COVID-19 deaths and authorities fear that April could be as grim as March in the country's overwhelmed hospitals.

Brazil has reached 3,00,000 confirmed COVID-19 deaths and become the second nation to top that figure.

Fueling Brazil's deadly outbreak is a more contagious variant of the novel coronavirus, known as P1, which emerged in its northern Amazon region near the end of 2020 and now predominates in much of the country.

Foes and allies alike are pleading with President Jair Bolsonaro to change course to stem a recent surge of daily deaths accounting for almost one-third of the total worldwide.

Bolsonaro, who has declined the coronavirus vaccine, opposes business closures and social distancing measures. A number of state governors, who tightened restrictions last year, have done so again in recent weeks despite the president's protests.

Bolsonaro this month began shifting rhetoric on the value of vaccines but continues to refuse restrictions on activity he paints as infringement on personal freedom and still promotes unproven COVID-19 cures.

He has not offered any update on imminent risks to oxygen supply in several states, dwindling stocks of sedatives for intubating COVID-19 patients, nor whether the federal government will resume timely reimbursements to governors for expanding hospital bed capacity. Among Brazil's 26 states and federal district, 18 are reporting at least 90 per cent intensive care unit occupancy.

Mato Grosso state's health care system already collapsed. Dr. Maria Auxiliadora Rosa, director of the Hospital Evang?lico in the small city Vila Bela, said in a video that went viral on social media that she fears there will be no oxygen for patients by the weekend.

Brazil, a sprawling country of 212 million people, has now administered at least one dose of vaccine to around six percent of its population, but is far off pace to reach its goal of vaccinating all adults by the end of the year.