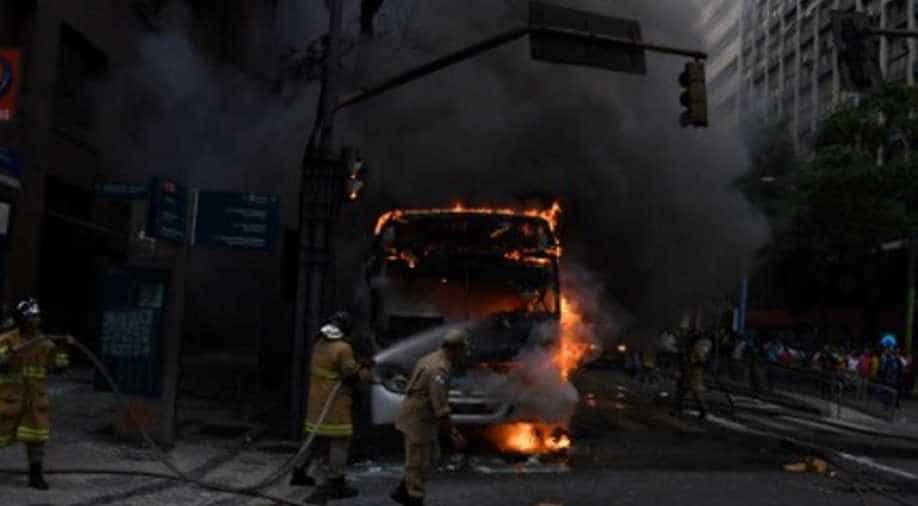 Violence spread, with gangs of youths wearing scarves over their faces setting fire to garbage cans, smashing up a bus, and attempting to attack police. Photograph:( AFP )

Brazilian riot police used tear gas and stun grenades in Rio de Janeiro Wednesday to break up a protest against austerity measures aimed at rescuing the state from near bankruptcy.

The center of the city that less than half a year ago was hosting the Olympic Games turned into a battlefield at lunch hour.

Police in gas masks fired waves of gas into crowds of hundreds of people attempting to gather outside the state legislature.
People ran from stun grenades that flashed and boomed repeatedly.

Most protesters were peaceful, but television footage showed a group trying to break through barriers protecting the state assembly, where deputies were considering austerity measures.

As police chased protesters, the usually busy avenues around the assembly emptied of traffic. Nervous shopkeepers pulled down metal shutters and went home.

They demanded payment of late salaries and the scrapping of austerity measures under consideration in the state assembly, which is confronting nearly empty coffers.

The measures include raising from 11 to 14 percent the pension withholdings from state employees, workforce cuts, and privatization of the Cedae sanitation utility.

"We haven`t received our overtime pay since July since the Olympic Games," said one striking police officer, who would only give her first name, Leticia.

"We`re still waiting for our last salary for last year and we haven`t received our salaries for January, when it`s now February," she said angrily.

"We haven`t received overtime pay since July -- including the work we did during the Olympics."

Violence spread, with gangs of youths wearing scarves over their faces setting fire to garbage cans, smashing up a bus, and attempting to attack police, who responded with barrages of stun grenades and smoke bombs until late afternoon.