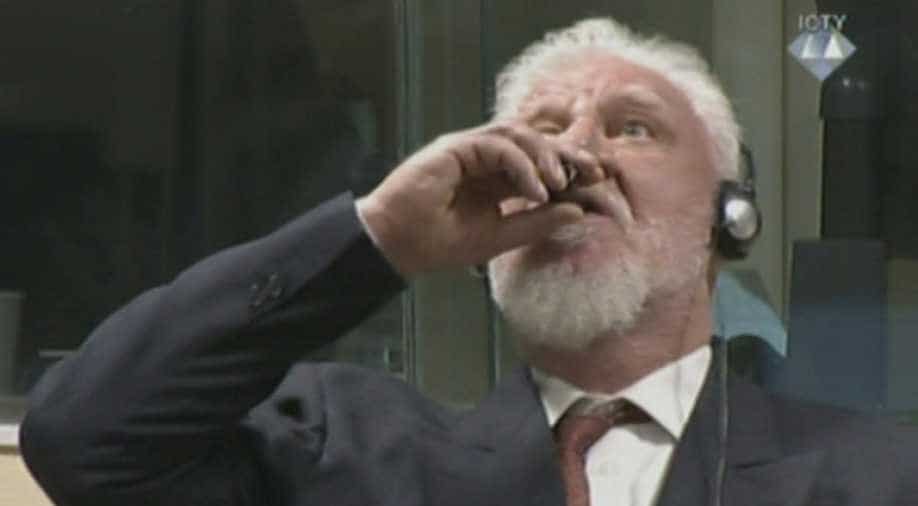 A wartime commander of Bosnian Croat forces, Slobodan Praljak, is seen during a hearing at the UN war crimes tribunal in the Hague, Netherlands on November 29. Photograph:( Reuters )

Slobodan Praljak, 72, died in hospital in the Hague after he was seen drinking from a flask after losing an appeal against a 20-year prison sentence

A Bosnian Croat wartime commander died after swallowing what he said was poison in a UN war crimes courtroom on Wednesday after losing an appeal against a 20-year prison sentence, Croatian state TV said.

Slobodan Praljak, 72, died in hospital in the Hague after he was seen drinking from a flask or glass as a UN judge read out the ruling against him and five other suspects, state TV reported, citing unnamed sources.

The apparent courtroom suicide, which was broadcast on a video feed, came in the final minutes of the last judgement at the International Criminal Tribunal for the Former Yugoslavia (ICTY), which closes next month.

"I just drank poison," he said. "I am not a war criminal. I oppose this conviction."

After gulping down the drink, Praljak sat back down and slumped in his chair, a lawyer who was in the courtroom at the time said.

UN court representatives and Dutch hospital officials declined to comment on his condition.

Croatian General Marinko Kresic, speaking earlier on Croatian TV, said he had spoken to the wife of another defendant, Milivoje Petkovic, who was in The Hague. "She confirmed that he drank the poison and that he is in a very grave health condition," he said.

The presiding Judge Carmel Agius suspended the hearings and paramedics raced to the courtroom, which was declared a crime scene by Dutch authorities. As forensic investigation got underway, the courtroom was sealed off, and the public was instructed to leave.

"Don't take away the glass," Agius said, instructing the guards to lower blinds and block a glass-partition separating the court from the public.

In the chaotic moments that followed, guards and paramedics raced in and out of the courtroom. Ambulances were seen leaving the tribunal, but there was no official confirmation of Praljak's condition.

A reading of the judgment, which was also deciding on charges against five other suspects, resumed more than two hours after Praljak said he had poisoned himself.

"The Dutch authorities have already commenced an investigation into what happened this morning,” he said.

The incident upstaged the appeals ruling, which was important for Croatia, where parliament was suspended so lawmakers could follow the reading of the verdict.

"Not a war criminal"

The court upheld convictions of Praljak and five other Bosnian Croats: Jadranko Prlic, the political leader of the Croatian province of Bosnia, along with military and police figures Bruno Stojic, Milivoj Petrovic, Valentin Coric and Berislav Pusic.

Judges upheld findings that there was a criminal conspiracy that included the regime of neighbouring Croatia under then-President Franjo Tudjman with the goal of "ethnic cleansing of the Muslim population" of parts of Bosnia to ensure Croatian domination.

The defendants on Wednesday received sentences ranging from 10 to 25 years. The decision cannot be appealed.

The chairman of Bosnia’s inter-ethnic presidency, Dragan Covic, a Croat, said: “He showed before the whole world what kind of sacrifice he is ready to make to prove that he is not a war criminal.”

The ICTY, established in 1993 by the UN Security Council, indicted 161 war crimes suspects from Bosnia, Croatia, Serbia, Montenegro and Kosovo. Of the 83 convicted, more than 60 of them were ethnic Serbs.

The court's lead suspect, former Yugoslav President Slobodan Milosevic, died of a heart attack in March 2006 months before a ruling in his genocide case.

Former Bosnian Serb military commander Ratko Mladic was found guilty of genocide by the UN war crimes tribunal last week and sentenced to life in prison for his role in massacres and ethnic cleansing during Bosnia's war.

Two defendants awaiting trial committed suicide by hanging themselves in their UN cells, according to court documents. Slavko Dogmanovic died in 1998 and Milan Babic was found dead in his locked cell in 2006.