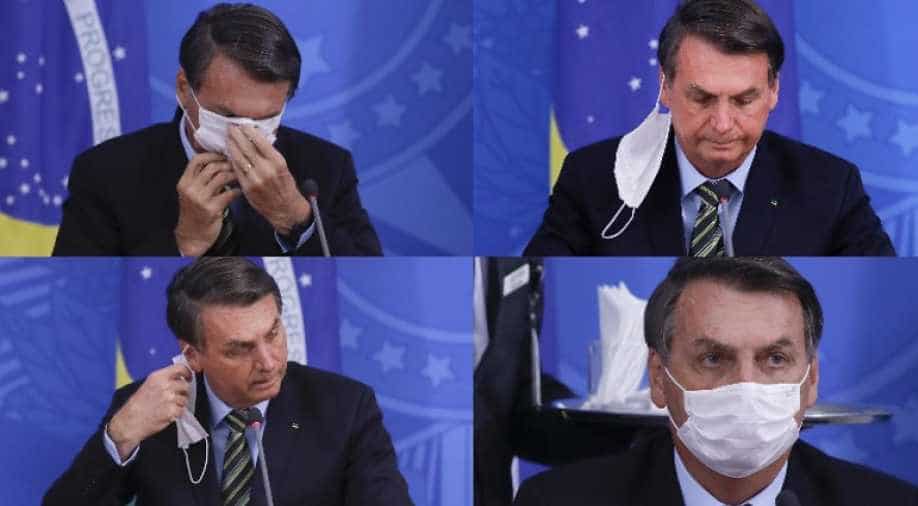 As Brazil confirmed four deaths due to coronavirus, Brazilians hit out at President Jair Bolsonaro after he said the nation should "calm down" and not "let ourselves go into hysteria" over the coronavirus outbreak.

Also Read: Not since World War-II has Germany faced such a challenge, says Merkel

In an awkward press conference, the Brazilian president repeatedly removed his mask and at one point it was stuck loosely from his ear and later got stuck over his eyes.

"I want to calm the Brazilian people...we can't let ourselves go into hysteria," Bolsanaro said while acknowledging the "gravity" of the pandemic.

The Brazilian president's announcement came even as two cabinet ministers and the head of the Brazilian Senate said they had tested positive for the new coronavirus.

Brazil erupted to the sound of banging pots and pans and shouts of “Bolsonaro out!” with protesters expressing their anger toward the president.

Brazil has 428 confirmed cases of coronavirus as the country grapples with the virus threat. The Brazilian president himself was tested earlier as reports showed negative results.

In an interview, the Brazilian president had said, "People are acting like it's the end of the world," adding, "The economy was doing well, but now some governors are taking measures that are really going to hurt it... It's not like having groups of people here and there is the problem. What we need to do is reduce the hysteria."

Brazil had earlier closed d schools, theatres and cinemas for at least 15 days in order to contain the virus with Rio's governor Wilson Witzel ordering people to stay off the city's beaches.