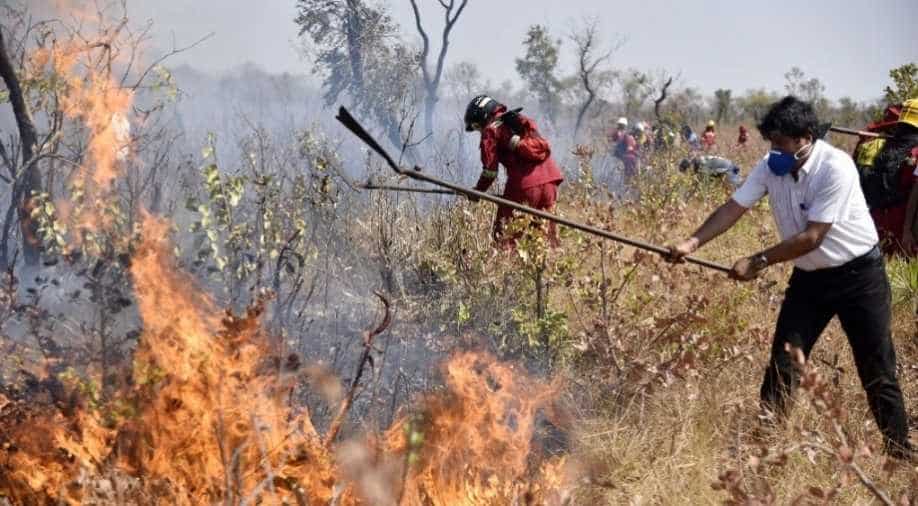 Bolivian President Evo Morales helps firefighters try to control a fire near Charagua, Bolivia, in the border with Paraguay, south of the Amazon basin. Photograph:( AFP )

Santa Cruz is the hardest hit of Bolivia's departments since the fires began in May and intensified in late August.

Wildfires raging in Bolivia's forests and grasslands since May have destroyed 1.7 million hectares (4.2 million acres), officials said Wednesday, amid an $11 million effort by the government to contain them.

Environmentalists blame laws enacted under leftist President Evo Morales, who has encouraged the burning of forest and pasture land to expand agricultural production, while the government attributes the blazes to dry weather and winds.

"Of the fires that have occurred, 41 per cent are in protected areas and 30 per cent are in forests," Cinthia Asin, environmental minister for the eastern region of Santa Cruz told the press, updating the amount of land burned to 1.7 million hectares.

Santa Cruz is the hardest hit of Bolivia's departments since the fires began in May and intensified in late August.

Much to environmentalists' chagrin, Bolivia's government recently authorized farmers to burn 20 hectares (almost 50 acres) instead of the usual five hectares (12 acres) -- which is believed to have contributed to thousands of wildfires.

Asin said that over the first days of September, 751 new fires blazed, mostly in forested areas, leading Santa Cruz officials to believe that humans had started the conflagrations to clear farmland.

Separately, the Bolivian government reported that it was continuing its land and air efforts to extinguish the fires.

Foreign Minister Diego Pary said that the executive branch had spent $11 million fighting the fires and had an additional $2 million at its disposal from international cooperation.

A SuperTanker Boeing 747 capable of carrying 75,000 litres (19,800 gallons), helicopters and some 4,000 firefighters, police and military personnel were all working to extinguish the flames.