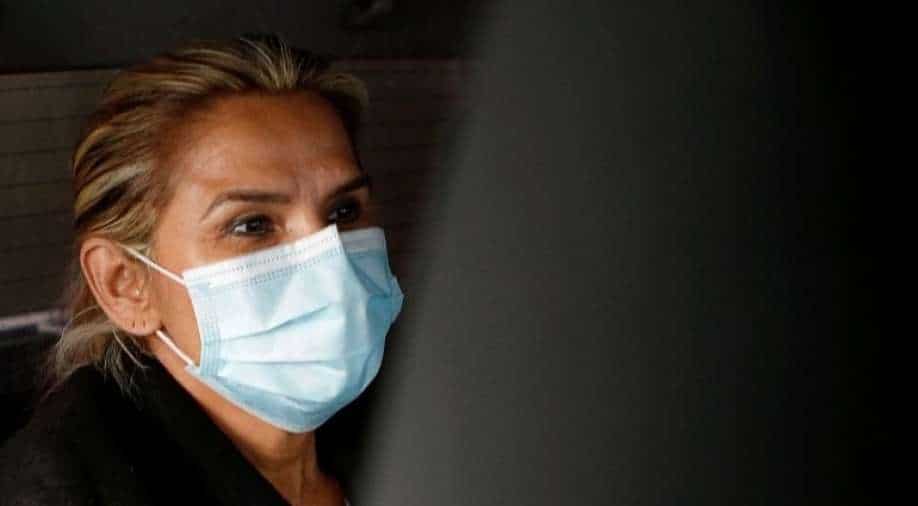 Anez and a raft of ministers and security officials face charges of terrorism, sedition and conspiracy over an alleged coup against Morales, according to an arrest warrant she posted on social media

Bolivia's former interim President Jeanine Anez landed behind bars on Saturday in the capital of the country she led just six months ago after the new government arrested her on claims she participated in a 2019 coup to seize power.

Anez and a raft of ministers and security officials face charges of terrorism, sedition and conspiracy over an alleged coup against Morales, according to an arrest warrant she posted on social media.

Hours after a dawn raid on Anez's home in the central city of Trinidad, she was pictured behind bars in a women's holding cell in La Paz awaiting a judicial hearing due to take place within 24 hours.

She claimed to be the victim of "aberrant political persecution."

In letters to the Organization of American States and the European Union, Anez appealed for observer missions to evaluate her arrest and those of her former energy and justice ministers.

"It is an absolute outrage, they are accusing us of being accomplices of an alleged coup," Anez told local television as she arrived in a military plane at a La Paz airport under heavy police escort.

"There is not a grain of truth in the accusations. It is simple political intimidation. There was no coup. I took part in a constitutional succession."

Anez took power in late 2019 after Morales resigned amid widespread violent protests against his government over allegations he fraudulently won an election when running for an unprecedented and unconstitutional fourth term.

At least 33 people were killed in violence that followed the election, 30 of them after Anez took office.

Morales' Movement for Socialism party, now headed by Arce, his former economy minister, swept back to power in a landslide election last October, prompting Morales to return from exile in Argentina.

Government Minister Eduardo del Castillo confirmed on Saturday that the Public Prosecutor's Office had detained Anez for involvement in a "coup in our country."

He insisted due process would be followed.

"There is no political persecution on our part here, and we do not fear anyone who thinks differently," he told a news conference.

Julie Chung, the U.S. State Department's acting assistant secretary for its Bureau of Western Hemisphere Affairs, urged "our friends and neighbours in Bolivia" to uphold civil rights and guarantee detainees due process.

"Americans and many across the Americas know from hard experience the need to safeguard and constantly renew democratic rule of, by, and for the people," she tweeted.

'WE ARE ALL JEANINE'

Luis Fernando Camacho, a lawyer and civic leader who became a powerful opposition figure and led protests against Morales in the 2019 election impasse, has also been named by prosecutors as wanted in relation to the alleged coup.

Any attempt to detain Camacho, recently elected as governor of the wealthy, industrial city of Santa Cruz to the east, could provoke civil unrest.

He told reporters on Saturday evening he was confident his supporters in the city would defend him.

"We are not going anywhere. This is my town, I am going to stay with the people who were in that fight ... to peacefully defeat the electoral fraud of Morales and MAS," he said.

Other opposition leaders who ran against Arce in the last election also spoke out against the arrests.

Carlos Mesa, a former president and candidate for the presidency in the 2019 election, told a press conference that Bolivia was flirting with Venezuelan-style autocracy.

"This is not a legal problem, this is a political problem," he said.

Anez's former Interior Minister Arturo Murillo, who was also named in the arrest warrant but is thought to have left Bolivia following Arce's election, tweeted "We Are All Jeanine."

"(Anez) gave her all for Bolivia, including her freedom," he wrote.

The Americas director of Human Rights Watch, Jose Miguel Vivanco, said the arrest warrants contained no evidence to support a claim of "terrorism."

"They generate justifiable doubts about whether this is not a politically motivated process," he added.