Bodies of civilians dumped near Philippines city besieged by Islamists 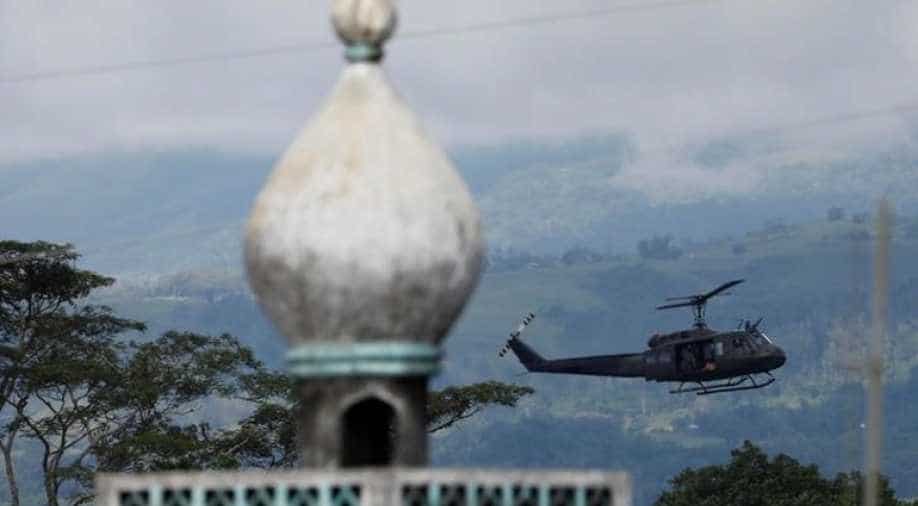 A military helicopter flies past a mosque in Marawi City in southern Philippines May 28, 2017. Photograph:( Reuters )

Bodies of what appeared to be executed civilians were found in a ravine outside a besieged Philippine city on Sunday as a six-day occupation by Islamist rebels resisting a military onslaught took a more sinister turn.

The eight dead men, most of them shot in the head and some with hands tied behind their backs, were labourers who were stopped by Islamic State-linked militants on the outskirts of Marawi City while trying to flee clashes, according to police.

Nine spent bullet casings were found on a blood-stained patch of road at the top of the ravine. Attached to one of the bodies was a sign that said "Munafik" (traitor).

The discovery confirms days of speculation that Maute rebels had killed civilians during a bloody takeover of Marawi City, that the military believes is aimed at winning the Maute recognition from the Islamic State group in the Middle East as a Southeast Asian affiliate.

The army deployed additional ground troops over the weekend and dispatched helicopters to carry out rocket strikes on Maute positions as fighters held buildings and a bridge deep inside a predominantly Muslim city where few civilians remained.

At least 41 militants were killed and 13 military as of Saturday, according to the army. The number of civilian dead was unknown.

The fierce resistance of the Maute gunmen and the apparent executions of civilians will add to growing fears that subscribers to Islamic State's radical ideology are determined to establish a presence in the southern Philippines, with the support of extremists from Indonesia and Malaysia.

Recalling information provided by their manager, Mangadang said the victims were pulled off a truck because they were unable to cite verses of the Koran, the Islamic Holy text.

"We heard gunfire, although I'm not sure if it was the same people who were shot," he said at the scene. "Early in the morning, at 8:20, there are civilians, concerned citizens, who said 'can you verify these dead bodies?'."

Fierce battles restarted on Sunday as ground troops engaged Maute fighters with heavy gunfire. Plumes of smoke were seen on the horizon and helicopters fired at least eight rockets on rebel positions.

A surveillance drone circled the sky above Marawi City. Some civilians left on foot, others were seen tying white cloths to poles to distinguish themselves from militants as soldiers huddled behind armoured vehicles slowly advanced.

An ambulance was seen speeding away from the fighting and soldiers said a captured militant was inside.

Tens of thousands of people have fled Marawi since Tuesday, when militants went on the rampage seizing a school, a hospital, and a cathedral.

Christians were taken hostage, according to church leaders, and more than 100 inmates, among them militants, were freed when rebels took over two jails.

Zia Alonto Adiong, a local politician who is coordinating efforts to get people out of the city, said there were bodies of dead civilians in Marawi. He criticised the military for conducting air strikes and for hampering efforts to evacuate civilians.

"Some have no food at all. Some fear for their lives," he said. "This is a conflict that has gone beyond proportion. The magnitude of the degree of the damage and the people that are affected ... it's really massive."

The violence erupted in the moments after a failed attempt by security forces to capture Isnilon Hapilon, a leader of a radical faction of another extremist group, who the government believes is Islamic State's point-man in the Philippines.

The military is certain the Maute are protecting Hapilon and had narrowed down his location. Hapilon leads a radical faction of another Mindanao-based group, the Abu Sayyaf.

The little-known Maute group has staged similar, days-long sieges on Mindanao island but none on the scale of Marawi, where witnesses said flags resembling those of Islamic State had been flown and some men were wearing black headbands.

The Maute group last year killed 14 people in a bombing in the president's home city, and its battlefield capability has been a serious challenge to a military that has far greater numbers and firepower.

Another concern for the government was the discovery of foreign fighters with the Maute, among them Indonesians and Malaysians, suggesting what was once a domestic problem could mushroom into a larger regional security threat.