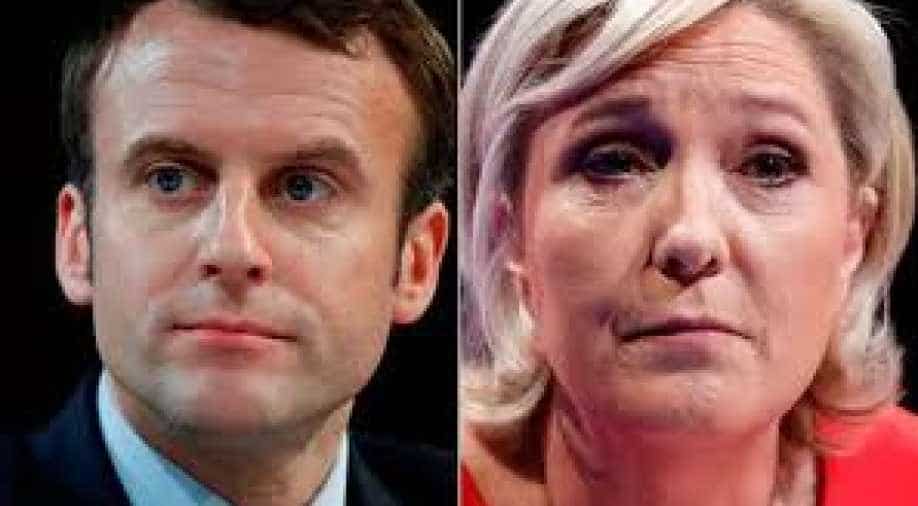 Le Pen's National Rally (RN) received 23.31 per cent of the vote, with Macron's centrist alliance trailing with 22.41 per cent.

Le Pen's National Rally (RN) received 23.31 per cent of the vote, with Macron's centrist alliance trailing with 22.41 per cent.

The two groups will have the same number of seats in the European Parliament, 23, after Britain's expected departure from the EU.

Le Pen, who lost out to Macron in a bitter presidential contest in 2017, called for the head of state to dissolve the parliament and call new elections, a proposal that was immediately rejected by the government.

"It is up to the president of the republic to draw conclusions, he who put his presidential credit on the line in this vote in making it a referendum on his policies and even his personality," Le Pen said in a brief speech late Sunday.

But despite triumphalist comments from RN figures, the final results were a mixed picture for the 50-year-old Le Pen: her party ended up losing ground since European elections in 2014 when it finished top with 24.9 per cent.

In a first reaction after exit polls were released late on Sunday, an aide to Macron called them "respectable". Leading allies of the 41-year-old president sounded satisfied that the margin of defeat looked like it would be slender.

A second-place finish for the ruling Republic on the Move (LREM) party was a disappointment for Macron after he put his reputation on the line by campaigning, but it is a symbolic setback that aides said would have no bearing on his policies.

"The catastrophe that some people predicted for Macron has not taken place and the RN has a significant score, but not a spectacular one when you compare it to five years ago," analyst Zaki Laidi from the Cevipof political institute said.

An aide to Macron, speaking to AFP on condition of anonymity, said that there would be "no change of line" and that he would intensify his planned reforms which include tax cuts for the middle classes and controversial changes to the pension and unemployment benefits system.

Prime Minister Edouard Philippe said the results confirmed the "redrawing" of French politics, which was evident in the presidential election in 2017 when France's traditional parties were eclipsed by Macron's new centrist movement and the far-right.

"The time is for action because the French people will judge us ultimately on one thing: results," Philippe said in a televised statement on Sunday.

He also said the government had "received a message about the ecological emergency" after France's main green party, EELV, looked set to finish third, with around 13 per cent of the vote compared with 8.9 per cent in 2014.

Macron had made no secret of the significance he attached to the results, telling regional French newspapers last week that the EU elections were the most important for four decades as the union faced an "existential threat".

He is a leading champion of further EU integration and is keen for further advances to link the economies, militaries and political systems of the bloc, which numbers 28 member states including Britain.

But for six months he has faced so-called "yellow vest" protesters who have blocked roads and demonstrated to denounce him as a "president of the rich" who has ignored the plight of the working poor and rural France.

Macron has since announced major tax cuts for the middle classes and a rise in the minimum wage.

His influence and Le Pen's in the European Parliament will now depend on whether they can make alliances.

Le Pen has previously called for the formation of a "supergroup" of eurosceptic parties, but the hard-right ruling party in Poland -- PiS -- has shunned her because of her pro-Russian views, while Hungary's Prime Minister Viktor Orban remains aloof.

"The gains for our allies in Europe and the emergence of new forces across the continent... open the way for the formation of a powerful group in the European Parliament," the RN's top campaigner, 23-year-old Jordan Bardella, told supporters on Sunday.

Macron meanwhile is in alliance with the ALDE centrist and liberal grouping which is seen as finishing third in the parliament behind the conservative PPE formation and the centre-left Socialists and Democrats (S&D).

But the French president, who redrew French politics in 2017, is still hoping to forge a new broader alliance of pro-European which would bring together so-called "progressives."

"At the European level, the president is still manoeuvring to form a large progressive alliance, a force that will be essential in the new parliament," an aide said on condition of anonymity.