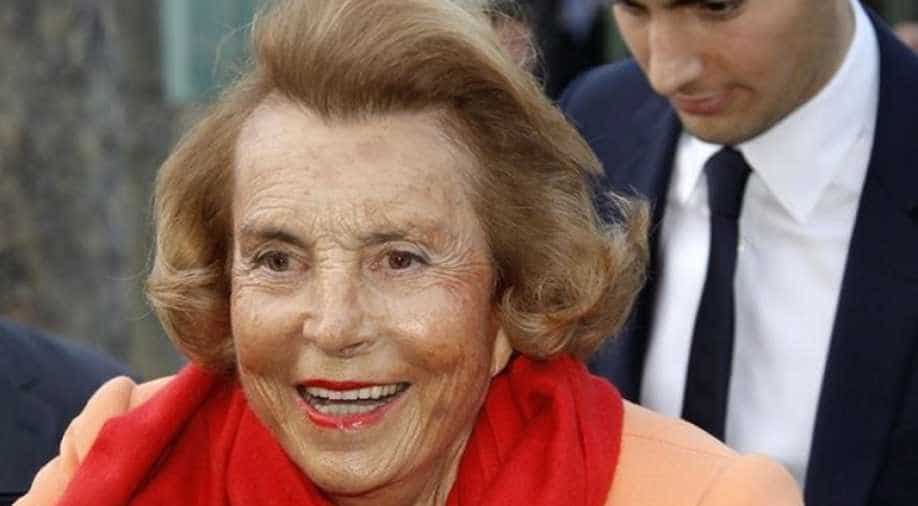 Liliane Bettencourt, the founder, and owner of L'oreal dies at the age of 94 confirms her daughter. Photograph:( Reuters )

Bettencourt, listed by Forbes as the world's richest woman, was the heiress to the beauty and cosmetics company her father founded just over a century ago as a maker of hair dye.

French businesswoman and billionaire Liliane Bettencourt, whose family founded L'Oreal and still owns the largest stake in the cosmetics giant, has died aged 94, her daughter said on Thursday.

Bettencourt, listed by Forbes as the world's richest woman, was the heiress to the beauty and cosmetics company her father founded just over a century ago as a maker of hair dye.

Her death opens a new phase for L'Oreal, France's fourth-largest listed company, altering the relationship it has with key shareholder Nestle, the Swiss food company.

Bettencourt and her family owned 33 percent of the company. Her daughter FrançoiseBettencourt-Meyers, who sits on L'Oreal's board along with her own son, said in a statement the family remained committed to the company and its management team.

"My mother left peacefully," Bettencourt-Meyers said, adding that she had died during Wednesday night at her home in Paris.

"I would like to reiterate, on behalf of our family, our entire commitment and loyalty to L'Oreal and to renew my confidence in its President Jean-Paul Agon and his teams worldwide."

In 2011 Agon was appointed the chairman and chief executive of L'Oreal, owner of the Lancome and Maybelline beauty and makeup brands and of Garnier shampoos.

Nestle, which owns just over 23 percent of L'Oreal, had agreed with the founding family that the two parties could not increase their stakes during Liliane Bettencourt's lifetime and for at least six months after her death.

The Swiss company has been a major investor since 1974 when Bettencourt entrusted nearly half of her own stake in the firm to Nestle in exchange for a three percent holding in the Swiss company. She made the move out of fear that L'Oreal might be nationalised if the Socialists came to power in France.

Activist hedge fund Third Point recently urged Nestle - which brought in a new chief executive, Mark Schneider, earlier this year - to sell down its stake as part of efforts to improve its performance.

A Nestle spokeswoman on Thursday did not comment on the company's stake, only saying: "It's time to send our sincere condolences to Madame Bettencourt's family."

Fascination with Bettencourt's wealth, complex family relations, and scandal-tinged life often propelled her into society pages and headlines, though she remained private and rarely gave interviews.

Her net worth was estimated at $39.5 billion earlier this year by Forbes, making her the world's richest woman and among the 20 wealthiest people in the world.

In a testament to the influence L'Oreal came to have in France, Finance Minister Bruno Le Maire on Thursday praised the stability Bettencourt had brought to the company through her ownership and said in a statement he hoped that the firm would maintain its close ties with its home market.

The marriage of the heiress to French politician Andre Bettencourt drew scrutiny when it emerged he had written anti-Semitic tracts at the start of World War Two. And Bettencourt was caught up in high-profile legal feuds almost until the last.

She had been under the guardianship of family members since a court fight, known as the "Bettencourt affair", ended with a ruling in 2011 that she was incapable of looking after her fortune because she suffered from dementia and had been exploited.

The case - brought by her daughter Françoise and which soured relations between the two - centred on Francois-Marie Banier, a celebrity photographer who befriended Bettencourt in the 1980s and received lavish gifts from her, including life insurance policies worth $400 million.

Another strand of the sprawling affair later led to allegations of illegal payments by Bettencourt to members of the French government associated with former president Nicolas Sarkozy in 2010. Sarkozy was eventually cleared in the case.

Paris-born Bettencourt joined her father Eugene Schueller's firm as an apprentice at the age of 15, mixing cosmetics and labeling bottles of shampoo.

She inherited the family fortune when her father Eugene Schueller, a chemist, died in 1957, though she delegated the day-to-day management of the firm. A widow since 2007, Bettencourtceased to sit on L'Oreal's board in 2012.