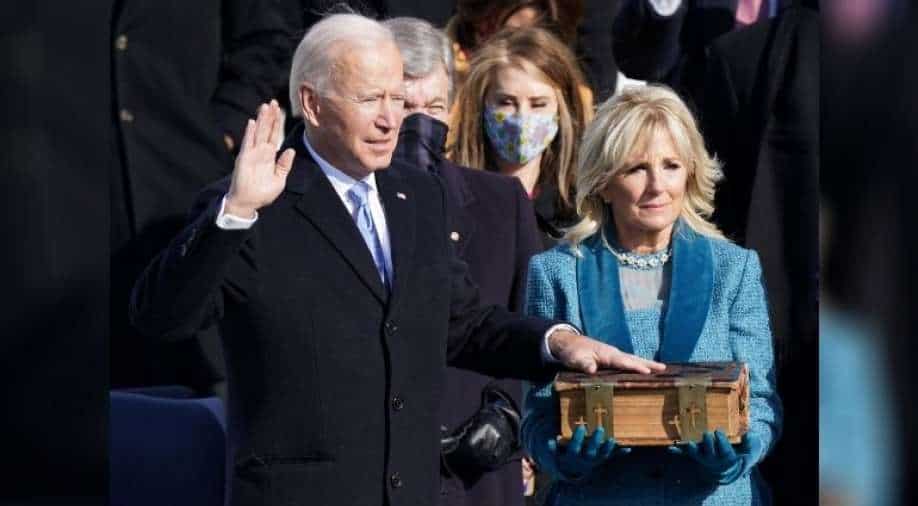 A file photo of swearing in ceremony of US President Joe Biden. Photograph:( Reuters )

When President Joe Biden took the oath of office Wednesday, he placed his hand on a familial artefact that has followed him throughout his 50-year political career: a hefty Bible, accented with a Celtic cross, that has been in his family since 1893

When President Joe Biden took the oath of office Wednesday, he placed his hand on a familial artefact that has followed him throughout his 50-year political career: a hefty Bible, accented with a Celtic cross, that has been in his family since 1893.

The Bible has been a staple at Biden’s past swearing-in ceremonies as a U.S. senator and as vice president. His son Beau Biden also used it when he was sworn in as the Delaware attorney general.

Joe Biden, who will make history as the country’s second Catholic president, after John F. Kennedy, often invoked his faith during the 2020 presidential campaign as he courted voters with a promise to restore the “soul of America.”

In an interview last month with Stephen Colbert, Biden shared some history about the family heirloom.

“Every important date is in there,” Biden said. “For example, every time I’ve been sworn in for anything, the date is inscribed.”

A person familiar with Biden’s inauguration preparations confirmed Wednesday that he would use the tome for his swearing-in.

The Bible that a president-elect chooses to use for the swearing-in ceremony often relays a symbolic message to the American public, said Seth A. Perry, an associate professor of religion at Princeton University and the author of “Bible Culture and Authority in the Early United States.”

“It’s difficult to imagine the ritual of the inauguration happening without that book at this point,” Perry said. “It’s part of the scenery. It’s part of the thing that gives the moment the authority that it has.”

Here’s a look how the Bible has figured into some of the most pivotal moments in U.S. history: the inaugurations of new presidents.

Washington’s Bible has been popular with other presidents.

Like much of the pageantry associated with presidential inaugurations, the presence of a Bible at swearing-in ceremonies is steeped in tradition, dating to the nation’s first president.

During his 1789 inauguration in New York, George Washington used a Bible from St. John’s Masonic Lodge No. 1. The Bible is said to have been retrieved after attendees noticed one was not on hand at Federal Hall, where Washington was preparing to take the oath of office, according to Claire Jerry, a curator of political history at the National Museum of American History.

The Bible represented the agreement that Washington was making with the American people, she said.

“Having sacred imagery associated with the taking of a covenant is fairly consistent and emphasizes that idea that we, who are witnessing the taking of the oath, and the individual who’s taking the oath are entering into a very profound relationship with each other,” Jerry said.

Washington’s Bible has been used in the inaugurations of four other presidents: Warren G. Harding, Dwight D. Eisenhower, Jimmy Carter and George Bush.

In 2017, President Donald Trump used one Bible that had been given to him by his mother when he was a boy and another used by Abraham Lincoln for his inauguration in 1861, just before the start of the Civil War. Barack Obama also used the Lincoln Bible when taking the oath of office, though in 2013, for his second inauguration, he supplemented it with a Bible given to Martin Luther King Jr. in 1954.

Some presidents have taken the oath of office with the Bible opened to a specific verse or passage, Jerry said. Popular choices include verses in Proverbs and Psalms.

How is an inaugural Bible chosen?

According to Mark Dimunation, head of the rare book and special collections division at the Library of Congress, presidents-elect often look for a text with which they have a personal connection or one that represents the history of the moment in which they are taking office.

“The electricity of that moment was profound,” Dimunation said of the use of the Lincoln and King Bibles by Obama, the nation’s first Black president. “It’s been ensconced in these objects that really would seem to be nothing more than a book, but it carries with it the weight of its moment and history.”

The Library of Congress, which is home to many notable Bibles, including Lincoln’s, often receives requests from politicians about texts they hope to use for their oaths of office. Transporting the texts from the library to politicians’ hands is no easy feat.

“It takes a village,” Dimunation said.

Texts are required to go through a conservation review and are often transported in a specially built box to ensure protection against bad weather and other unfavorable conditions. The entire process is “handled at a high level of security,” Dimunation said.

Does the president have to use a Bible?

Although presidents and members of Congress are required by the Constitution to take an oath of office, they are not required to place a hand on a sacred text while doing so. But if they choose to swear on an object, they can pretty much use any text they prefer.

John Quincy Adams used a book of law during his ceremony, and in 1963, after Kennedy’s assassination, Lyndon B. Johnson took the oath of office aboard Air Force One with his hand on a Roman Catholic missal.

Over the years, members of Congress have also incorporated other texts in their swearing-in ceremonies, sometimes speaking to their own personal faith or beliefs, Jerry said.

In 2007, Rep. Keith Ellison of Minnesota, the only Muslim in Congress at the time, used Thomas Jefferson’s Quran at his swearing-in ceremony. In her swearing-in photo, Rep. Rashida Tlaib, D-Mich., used a Quran given to her by her best friend.