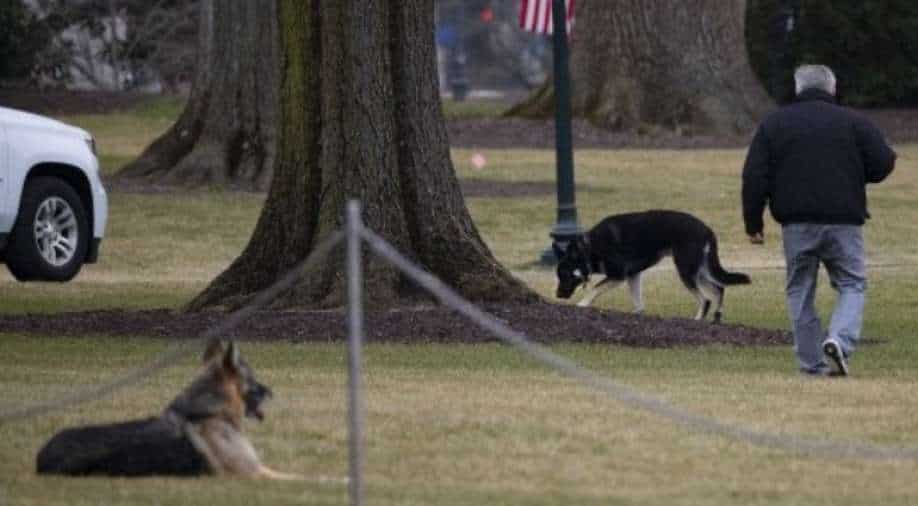 In this file photo taken on January 25, 2021 First dogs Champ and Major Biden are seen on the South Lawn of the White House in Washington, DC Photograph:( AFP )

Major Biden, one of the Biden dogs exhibited aggressive behaviour, which prompted the relocation

United States President Joe Biden, who pledged to bring back pets inside the White House recently suffered a setback after two German Shepherds belonging to the family were returned to their home in Delaware.

Major Biden, one of the Biden dogs exhibited aggressive behaviour, which prompted the relocation as reported by CNN. Major was adopted by the Biden family in November 2018 from the Delaware Humane Association (DHA) situated in Wilmington. Major's induction into the White House marked the first rescue dog to grace the halls of the presidential residence. The family's other dog, Champ also joined Major.

It is being described as a "biting incident" involving a White House security official. The condition is unknown, but the dogs have still been moved.

Major, three-years-old is the younger of the Biden dogs, and has shown agitated behaviour on multiple occasions, including jumping and barking, and "charging" at staff members, according to CNN.

The other dog is called Champ is roughly 13-years-old. Owing to his age, he has physically slowed down. Both the dogs had moved into the White House in January, a week after Biden's presidential inauguration.

Jill Biden, during an appearance on "The Kelly Clarkson Show" said that she had been "obsessed" with settling the dogs, for both the dogs belong to varied age groups.

She referred to lifestyle changes for the dogs, who were not used to taking the lift, and going out on the South Lawn with many people watching them. "I've been obsessed with getting everybody settled and calm", she told Clarkson.