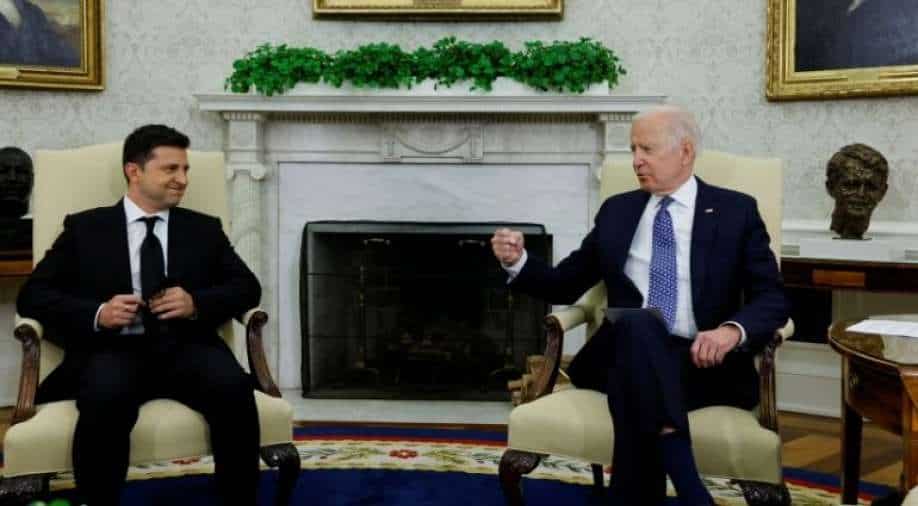 US President Joe Biden gestures as he meets with Ukraine's President Volodymyr Zelenskiy in the Oval Office at the White House in Washington Photograph:( AFP )

US President Joe Biden has vowed to support Ukrainian President Volodmyr Zelenskiy as it grapples with aggression from Moscow.

Biden told the Ukrainian president in the Oval Office, "The United States remains firmly committed to Ukraine's sovereignty and territorial integrity in the face of Russian aggression and our support for Ukraine's Euro-Atlantic aspirations."

From NATO membership to Nord Stream 2 pipeline several topics of mutual interests were discussed by the two leaders.

Biden has offered Kyiv $60 million in new security aid including Javelin anti-armor systems and other "defensive lethal and nonlethal capabilities."

However, Biden has shown no sign of moving on Ukraine's requests to open NATO to the eastern European country after a standoff with Russia this year in which Moscow massed additional troops and military equipment near Ukraine's borders.

Ukraine and Russia have been at odds since Russia annexed the Crimea peninsula from Ukraine in 2014 and backed separatists in a conflict in Ukraine's eastern Donbass region, which Ukraine says has killed 14,000 people.

The White House visit was undoubtedly a triumph for Zelensky, who has been trying to line one up since he took office in 2019.

He is the second European leader to get a White House meeting so far under Biden.

The meeting came after the Biden administration announced a deal last month with Germany intended partly to allay Ukrainian concerns about the Nord Stream 2 pipeline being built under the Baltic Sea to carry gas from Russia's Arctic region to Germany.

The White House says it remains concerned by the geostrategic implications of the pipeline, which will funnel energy directly from Russia to Germany, bypassing the previous route through Ukraine.

The two countries said in a joint statement after the meeting that they both oppose the project and "support efforts to increase capacity for gas supplies to Ukraine from diversified sources."