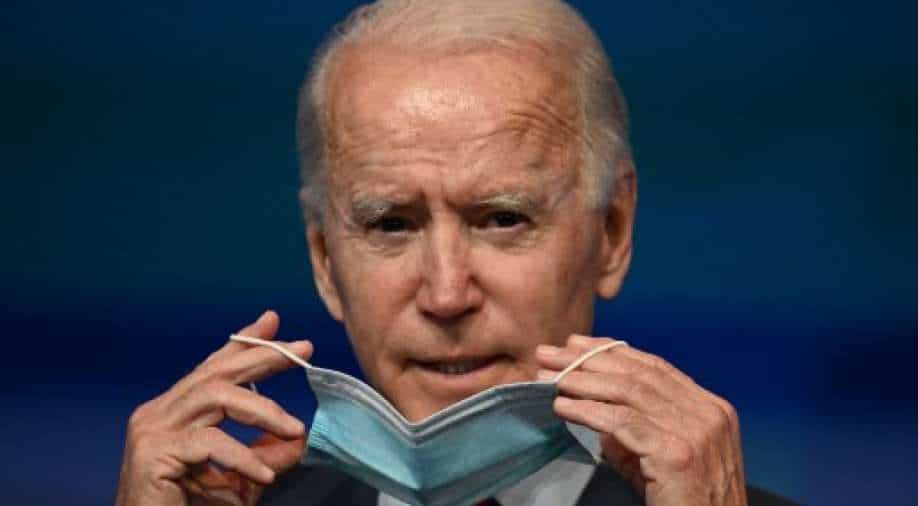 At a briefing in Wilmington, Delaware on Tuesday, Biden said he needed Congress to fully fund delivering vaccines to all corners of the United States.

US president-elect Joe Biden has laid out a plan to fight the coronavirus pandemic during his first 100 days in office -- according to which his first few months will likely be dominated by the pandemic, which is straining hospitals amid a nationwide resurgence.

He has vowed his administration would vaccinate 100 million Americans.

At a briefing in Wilmington, Delaware on Tuesday, Biden said he needed Congress to fully fund delivering vaccines to all corners of the United States.

Getting children back to school will be a national priority in the first 100 days, Biden said.

"In 100 days, we can change the course of the disease and change life in America for the better," said Biden, who takes office on Jan. 20. "Whatever your politics or point of view, mask up for 100 days."

The coronavirus has killed more than 283,000 Americans and caused millions to lose their jobs.

He also picked US Representative Marcia Fudge of Ohio to be the second Black woman to lead the Housing and Urban Development Department, and Tom Vilsack, the former agriculture secretary, to fill the same role again, according to news reports on Tuesday.

Biden introduced California Attorney General Xavier Becerra, a Latino former congressman, as his nominee for secretary of health and human services. Becerra has a long record of supporting the Affordable Care Act, better known as Obamacare.

Jeff Zients, an economic adviser known for his managerial skills, will serve as Biden's coronavirus "czar," overseeing the pandemic response, including the vaccine distribution.

"Help is on the way," Vice President-elect Kamala Harris said after Biden's new healthcare team members introduced themselves. "And it is long overdue."

Trump has so far refused to concede his November 3 election defeat, citing unsubstantiated claims of widespread voter fraud. On Tuesday, Texas filed a lawsuit petitioning the US Supreme Court to throw out the results in four other states in a long-shot bid to help Trump reverse the election's outcome.

The Trump campaign and allies have filed numerous lawsuits seeking to challenge vote counts in multiple states but have met with little success. State officials have said they have found no evidence of widespread fraud.

The rest of Biden's top public health advisors include Dr. Rochelle Walensky, chief of infectious diseases at Massachusetts General Hospital in Boston, who will run the US Centers for Disease Control and Prevention; Dr. Anthony Fauci, director of the National Institute of Allergy and Infectious Diseases, who will also be Biden's chief medical adviser on the virus; and Dr. Vivek Murthy, the former surgeon general, who will reprise that role under Biden.