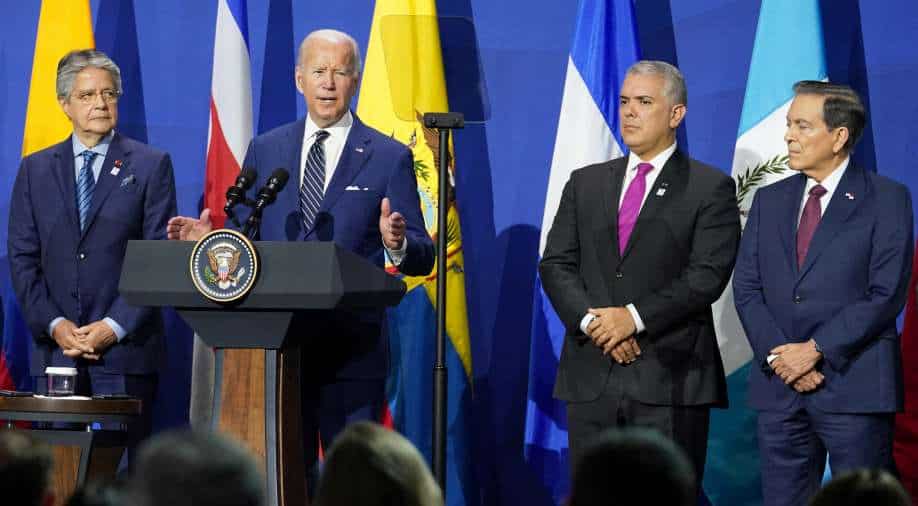 The administration, facing a record flow of illegal migrants at its southern border, pledged hundreds of millions of dollars in aid for Venezuelan migrants, renewed the processing of family-based visas for Cubans and Haitians and eased the hiring of Central American workers.

A new set of measures were rolled out on Friday to confront the regional migration crisis by U.S. President Joe Biden and fellow leaders from the Western Hemisphere, seeking to salvage an Americas summit roiled by division.

Biden's aides had touted the migration declaration as a centrepiece of the United States-hosted Summit of the Americas, and 20 countries joined him for a ceremonial unveiling of the plan, though several others stayed away.

Capping the summit's final day, the White House promoted a series of migrant programs agreed upon by countries across the hemisphere and Spain, attending as an observer, which pledged a more cooperative approach. But analysts were sceptical that the pledges are meaningful enough to make a significant difference.

Those measures include the United States and Canada committing to taking more guests, providing pathways for people from poorer countries to work in richer ones, and other countries agreeing to greater protections for migrants. Mexico also will accept more Central American workers, according to a White House statement.

"We're transforming our approach to managing migration in the Americas," Biden said. "Each of us is signing up to commitments that recognise the challenges we all share."

The flags of 20 countries, several fewer than the number attending the summit, festooned the stage where Biden led the rollout. But that number was only achieved after days of U.S. pressure.

It was another sign of tensions that have marred the summit, undermining Biden's efforts to reassert U.S. leadership and counter China's growing economic footprint in the region.

That message was clouded by a boycott by several leaders, including Mexico's president, to protest Washington's exclusion of leftist U.S. antagonists Cuba, Venezuela and Nicaragua. The line-up was thinned to 21 visiting heads of state and government.

The administration, facing a record flow of illegal migrants at its southern border, pledged hundreds of millions of dollars in aid for Venezuelan migrants, renewed the processing of family-based visas for Cubans and Haitians and eased the hiring of Central American workers.

The announcements were part of the unveiling of the U.S.-led pact dubbed the "Los Angeles Declaration" and aimed at spreading responsibility across the region to contain the migration problem.

The plan culminates in a summit designed to re-establish U.S. influence among its southern neighbours after years of relative neglect under former President Donald Trump. Biden proposed an economic partnership to help the region's pandemic recovery - though it appears to be a work in progress.

Jorge Castaneda, a former Mexican foreign minister, said pledges from the Americas should allow Washington to argue it had secured major commitments, a domestic "political plus" forbidden. But he added: "On substance, there's nothing here."

Mexico, whose border with the United States is the main point of migration - backed the declaration, despite Lopez Obrador's no-show.

The absence from the summit of leaders of Guatemala, Honduras and El Salvador - the Northern Triangle from which many migrants come - has raised doubts about how effective the pledges will be. U.S. officials insisted the turnout did not prevent Washington from getting results.

The declaration encompasses commitments by an array of countries, including Mexico, Canada, Costa Rica, Belize and Ecuador. There was no mention, however, of pledges by Brazil, Latin America's most populous nation.

The announcement did not include any U.S. pledges for additional work visas for Mexicans. That would form part of Lopez Obrador's visit with Biden next month, an official said.

Curbing irregular migration is a priority for Biden. Republicans, seeking to regain control of Congress in November elections, have pilloried the Democratic president for reversing Republican Trump's restrictive immigration policies.

But migration has had to compete with Biden's other major challenges, including high inflation, mass shootings and the war in Ukraine.