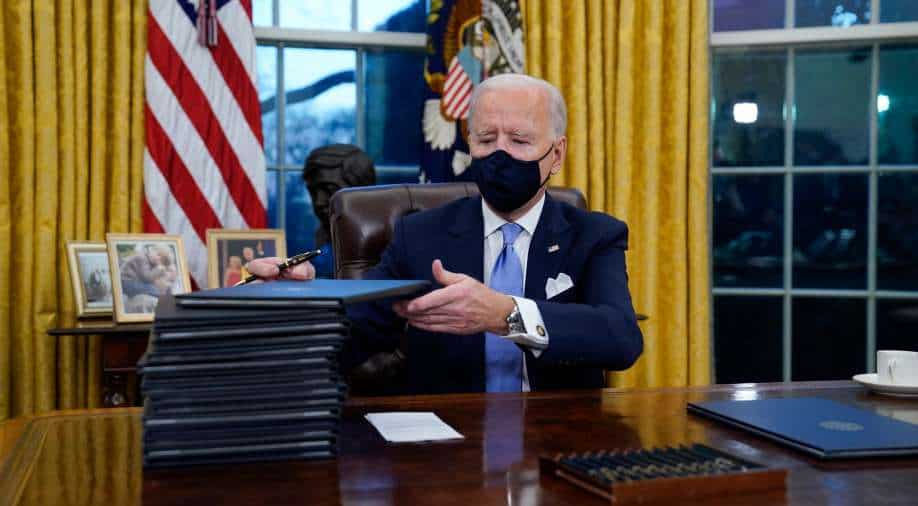 Biden's actions on Tuesday will follow six immigration orders he issued on his first day in office and will further jumpstart his ambitious pro-immigrant agenda that seeks to erase Trump's restrictive policies on legal and illegal immigration.

US President Joe Biden is slated to order a major review of asylum processing at its border with Mexico, and the legal immigration system as he seeks to undo some of former president Donald Trump's hard-line policies. He on Tuesday will also sign a series of executive orders overhauling the US immigration process, signalling a return to a more inclusive policy.

The Democratic president will create a task force to reunite migrant families who were separated at the US-Mexico border by Trump’s 2018 "zero tolerance" border strategy. He will also sign another executive order dealing with regional migration.

Biden's actions on Tuesday will follow six immigration orders he issued on his first day in office and will further jumpstart his ambitious pro-immigrant agenda that seeks to erase Trump's restrictive policies on legal and illegal immigration.

As part of the actions, he will call for a review of a Trump-era rule that made it harder for poorer immigrants to obtain permanent residency in the United States. He will also mandate a review of the Migrant Protection Protocols (MPP), a controversial programme that pushed 65,000 asylum seekers back to Mexico to wait for US court hearings. Most returned to their home countries but some remained in a makeshift camp near the Mexican border.

The Biden administration has already stopped adding people to the programme but crucially it has not yet outlined how it will process the claims of those already enrolled.

Chad Wolf, former acting US Department of Homeland Security secretary under Trump, said in an interview that halting the MPP programme was a mistake because it had been an effective deterrent to illegal immigration.

Biden's review of Trump’s so-called “public charge” rule is expected to start the process to rescind it, according to two people familiar with the plan. The rule makes it harder for immigrants who are poor or need government help to secure residency and stay in the country.

It remains unclear whether Biden's executive orders on Tuesday will address two Trump proclamations that banned the issuance of many work and immigrant visas, which Trump had said would protect American jobs during the coronavirus pandemic.

The working group will examine ways to reunite the families, officials said, without specifying whether that could allow parents or children who had been deported to return to US soil.

A second executive order echoes a similar policy under the Barack Obama administration, putting in place legal mechanisms for prospective immigrants in their home countries to apply for residency, allowing them to avoid dangerous smuggling routes.

The third decree will promote the integration of migrants legally settled in the United States and make naturalization "more accessible to the more than nine million immigrants who are currently eligible to apply" for citizenship.

Most of the reforms will be led by the Secretary of Homeland Security.

Biden has nominated Alejandro Mayorkas to the position, and the Senate will vote on his appointment midday Tuesday.

If confirmed, Mayorkas -- who arrived in the United States as an infant as the son of Cuban refugees -- will be the first Hispanic person to lead the Department of Homeland Security, a sprawling agency that oversees immigration issues, border police and emergency responses.